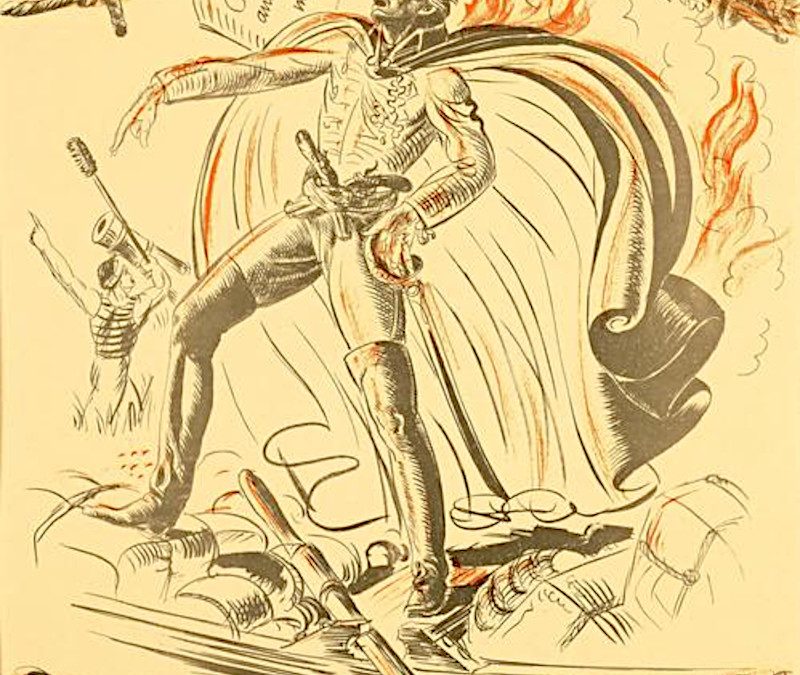 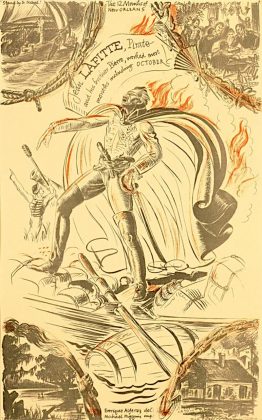 This image is the ninth in a series of images by Enrique Alferez, published by Michael Higgins as “The Twelve Months of New Orleans.” Higgins published the illustrations in 1940. The image features Jean Lafitte.

Lafitte the Hero is the theme of October’s illustrations.

Top Left: Stand by to board! Lafitte the pirate maneuvers a ship, approaching his prey. The captain of the other vessel weighs his options. Fight, flight, or surrender! Flight likely isn’t an option at this point. Fight? A pirate crew? Risky. The border features ropes and a pulley from a ship’s mast.

Top Right: City Life. A group of men surround a table. The two towards the center gesture, but why? Is this a spirited conversation? An argument leading to a demand of satisfaction? Excitement over a card game? City life in the early 19th century enabled the Lafitte brothers to sell smuggled goods and develop customers. The floral border contrasts with the rough ropes of the ships.

Bottom Left: Bayou Barataria. Lafitte established a base along Barataria Bay. This location afforded good access to the Gulf of Mexico. The bay provided security for smuggling. Barataria Bay presented challenges to the US Navy, when they wanted to shut down the operations. The border displays an arm holding a torch.

Bottom Right: The Blacksmith Shop. While the Lafittes didn’t own the Blacksmith Shop at the corner of Bourbon and St. Phillip, it made a good meeting place. A potential customer avoided entertaining smugglers and pirates in their home. A trip to the blacksmith offered cover. The anchor and chain of the corner’s border presents the sea-captain connection to the shop.

Jean LAFITTE, Pirate,
and his brother Pierre, worked most
months, including OCTOBER

Alferez pictures Lafitte aboard one of his ships, ordering cannon fire. He stands at the edge of the deck, as a gunner aims a cannon in the background. Flames rise behind them.

See you for the eleventh image in November.

NOTE: Apologies for October in November! 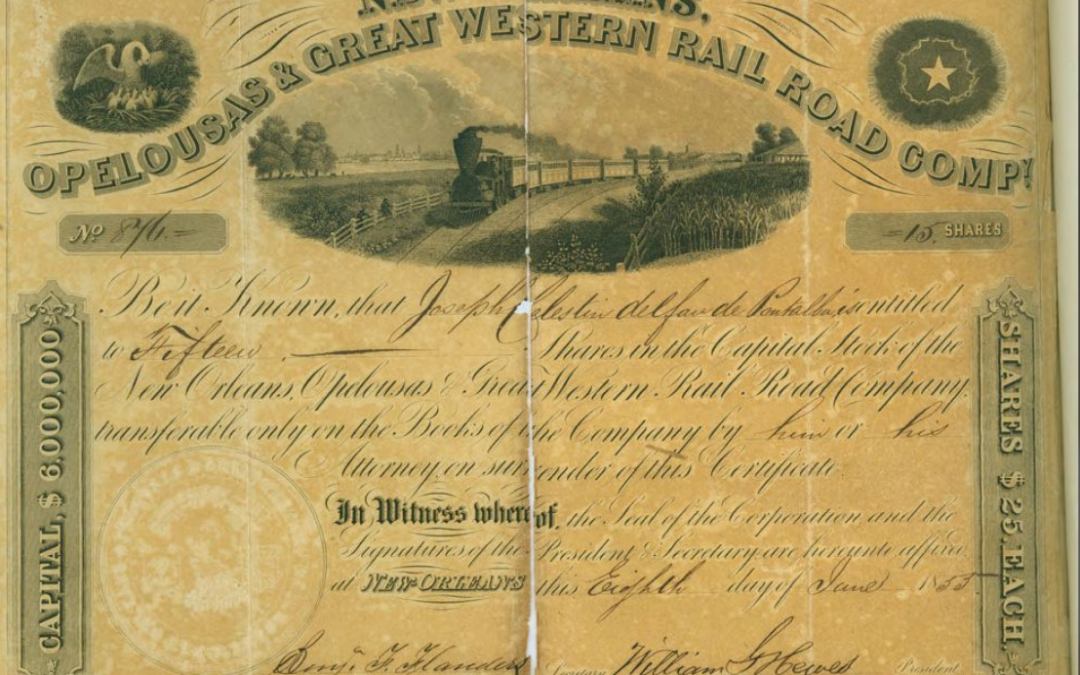 This railroad stock certificate, from the New Orleans, Opelousas, and Great Western Railroad was issued in 1853. 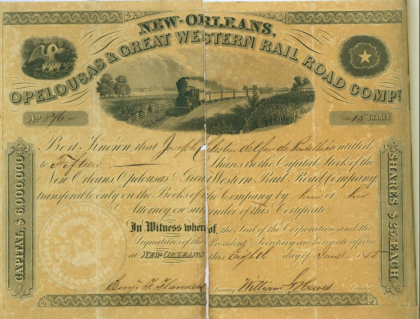 Chartered in 1852, the New Orleans, Opelousas, and Great Western Railroad (NOO&GW) sought investors immediately. The railroad planned to connect New Orleans with Houston, Texas, and points in between. The company  built a station in Algiers, Louisiana. They expanded westward from there. By 1857, the railroad reached Morgan City, Louisiana. Construction stopped there for more than twenty years. The company was unable to continue west because of the Southern Rebellion.

NOO&GW used “Texas Gauge” in constructing the initial 83 miles of track (prior to the Rebellion). While “standard gauge” 4′ 8 1/2″, Texas Gauge is 5’6″ in width. Proponents of the wider gauge argued that it allowed locomotives to include more features. They also argued that the wider gauge offered passengers a more comfortable ride. Street railway operators agree, since they use wide gauge track systems. The only remaining railroad in the United States operating with Texas Gauge is Bay Area Rapid Transit (BART), the subway system for San Francisco, Oakland, and the Bay Area.

Steamship magnate Charles Morgan acquired the NOO&GW in 1869. He re-built the railroad using standard gauge. Morgan realized that the railroad would be a better target for acquisition if it connected easily to those systems expanding from the west. New Orleans was already a major rail hub, with connections to Chicago and the Eastern Seaboard. He was right, as the Southern Pacific system eventually acquired NOO&GW.

This stock certificate represents 15 shares of stock in the railroad. The company proclaims capital in the amount of $6 million on the left side of the certificate. The right side states the value of each share is $25. So, its value is a total of $375. That’s a sizeable investment in a company that, at the time of issue, had no track! 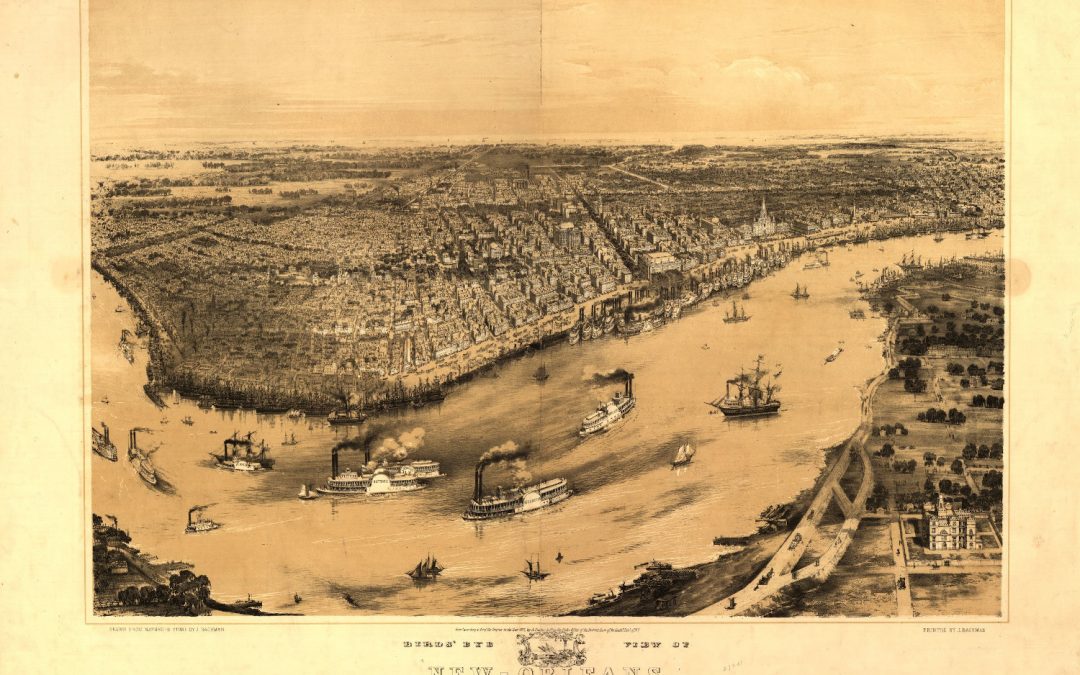 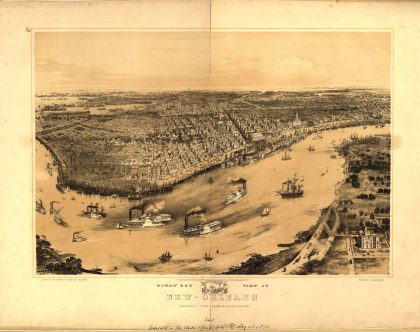 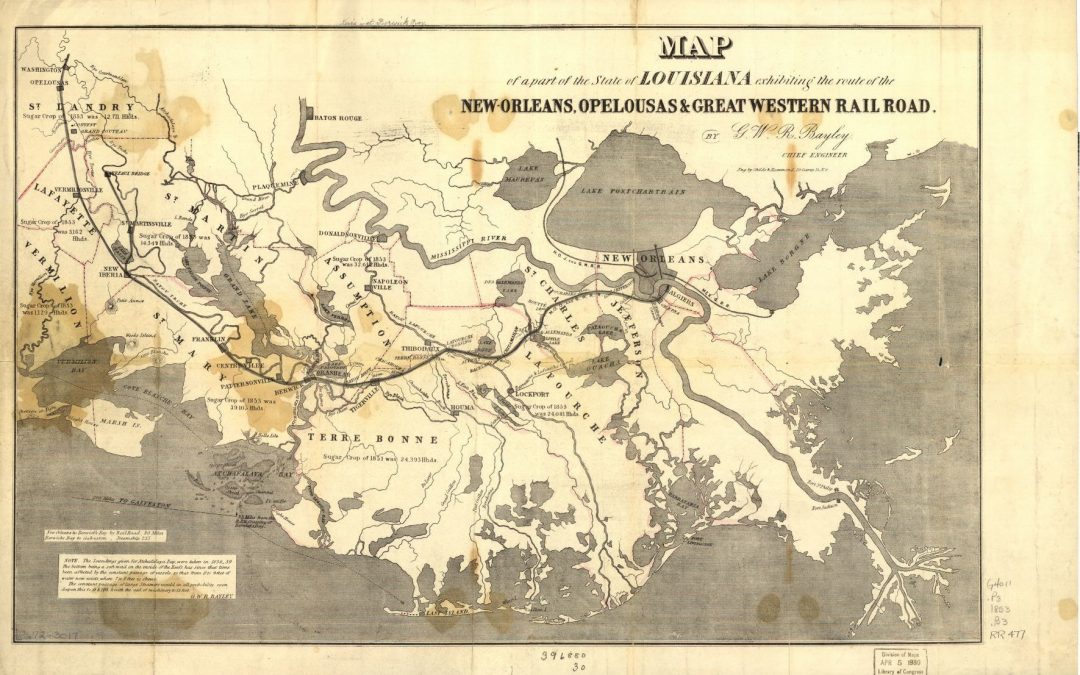 Westbound railroads from New Orleans originated with the NOOGW. 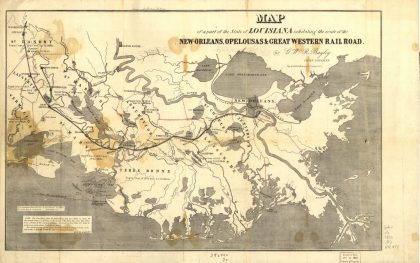 The New Orleans, Opelousas, and Great Western Railroad offered service to the West of New Orleans. We’ve talked about NOOGW in previous posts, but this particular map contains some interesting points.

The Library of Congress summary for this map says, “Mississippi delta area shows drainage, sugar crop, parishes, major cities and towns, canals, and railroads with lines named and distances on the main line.” All those details make perfect sense for pitching a Westbound railroads. Sugar farmers require transportation, once they turn raw sugar into a granulated form, or molasses. Railroads connect towns. These points hit what investors want to hear.

LOC attributes the map to G. W. R. Bayley, published by company, Childs & Hammond. While there are no notes beyond attribution, it looks like someone took Bayley’s map and drew train tracks on it. Not that there’s a problem with that, as the saying goes.

Algiers to the west

The NOOGW serviced the city from a terminal in Algiers. This station played an important role in the Southern Rebellion. NOOGW’s fifty miles of track enabled the Union Army to supply their troops to the west. The rebels defended the Mississippi River fiercely. So, coming up from the South created two fronts of attack. The Union Army pushed up from New Orleans. Grant pushed down from St. Louis. Denying the rebels access to the river played an important role in shortening the rebellion.

After the rebellion, the NOOGW route extended past Morgan City, eventually into Texas. The Algiers facilities became part of the Southern Pacific system. SP expanded operations in Algiers. They built a full freight yard there. That yard later moved to Avondale. 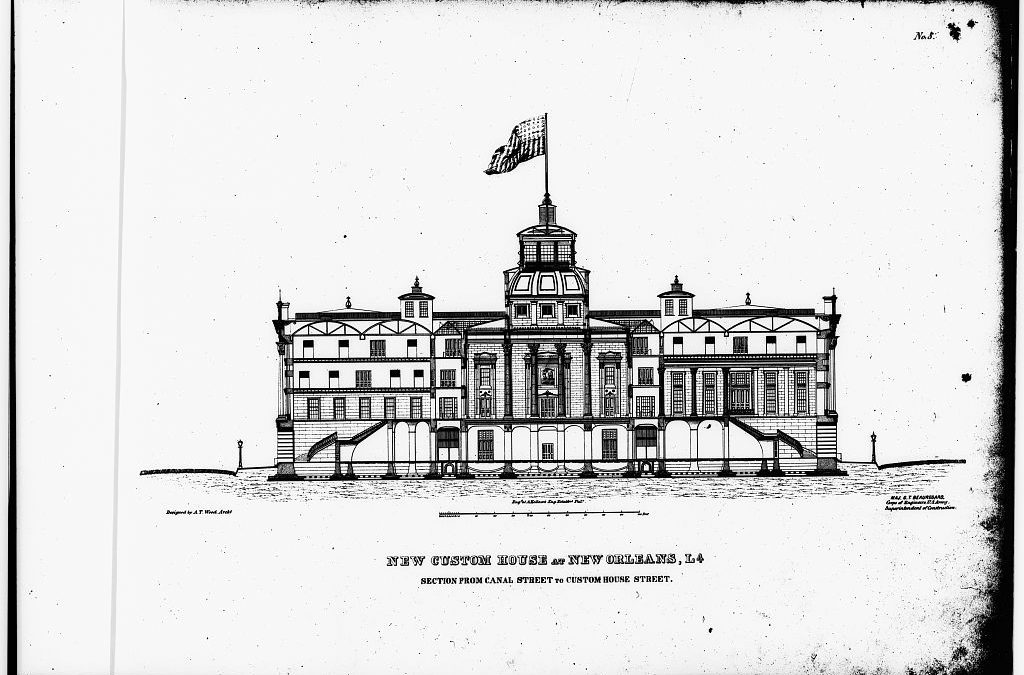 This Custom House preliminary design evolved over the 1850s. 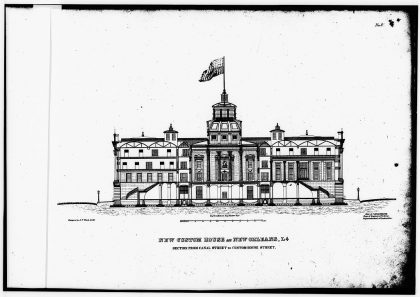 The Custom House occupies the 401 block of Canal Street. The final design became the building still standing. The Custom House functions as a federal office building. Additionally, it was the former location of the Audubon Insectarium.

The structure was designed by Alexander Thompson Wood; however,
Mr. Arthur quotes James Gallier, Senior’s claim in his (Gallier’s)
autobiography that Wood had plagiarized the design from models and
plans submitted by Dakin and Gallier. [Arthur, A History . . __,
New Orleans, page 8,]

So, this appears to be the design that Gallier accused Wood of plagiarizing. The government suspended Wood. James E. Dakin continued the project. Arthur says, “…Dakin began a series of changes in the original design ‘to see that the building should be arranged and constructed in the best and most convenient manner to meet the wants and purposes designed'”

Dakin transformed this concept drawing into the current building. The cornerstone of the Custom House was laid on 22-February-1849. The cornerstone is no longer visible, because the foundation sunk 30″ at the time. So, the project required engineering intervention.

So, P.G.T. Beauregard assumed management of the Custom House construction in 1853. Gus was the Supervising Engineer for Southeast Louisiana. He held the rank of brevet Major (permanent rank of Captain) at the time. By 1858, Beauregard set up his office in the building. The Army promoted Gus to Colonel and appointed him to Superintendent of the United States Military Academy at West Point. So, he left the Custom House for West Point. While Gus was eminently qualified, the appointment fell through. Louisiana seceded and the US Army rescinded the appointment. They lost trust in Beauregard. Gus resigned from the Army and returned to his office on Canal Street.

The National Park Service documented the facility as part of its Historic American Building Survey. The building is HABS No. LA-1109. This preliminary design dates to 1851. It was published in a collection of images in 1857. 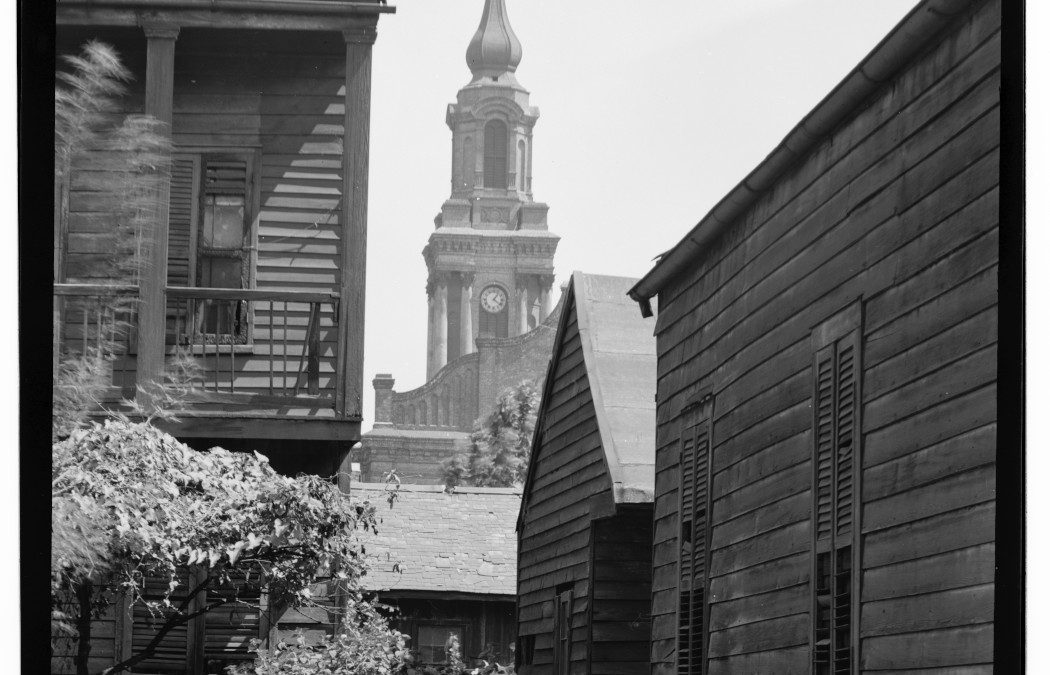 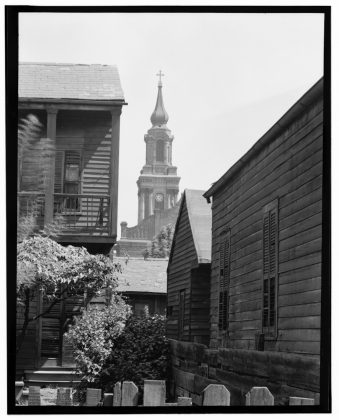 Photo of St. John the Baptist Church from 1933. It is part of a Historic American Buildings Survey (HABS). While the record lists the location of the church as Dryades Street, the current name of the street is Oretha Castle Haley Boulevard. So, historically, it stood on the corner of Dryades and Calliope Streets.

Here’s the description in the HABS:

Significance: The corner stone was laid in 1857, and the church was completed in 1861, Father Jeremiah Moynihan, the pastor, having supervision of the planning and building. Fifteen stained glass windows were installed in 1902. … The building was erected in a time of opulence and no expense was spared to make it one of the handsomest churches in the city, but by the time it was completed, at the outbreak of four years of war, there ensued much general financial distress. The parish was unable to meet its obligations, and was declared bankrupt in 1878. The church and the adjacent parish school building were bought by the pastor, Father Kenny, and reverted to the Congregation.
– Survey number: HABS LA-1105
– Building/structure dates: 1861 Initial Construction
– Building/structure dates: 1902 Subsequent Work

The construction of St. John the Baptist Church demonstrates the expansion of the Irish community in New Orleans. St. Patrick’s parish formed in 1833, in the CBD. The Irish in the “Redemptorist Parish” of the Lower Garden District and the Irish Channel built St. Alphonsus in the mid-1850s. (The community completed St. Alphonsus in 1857.) So, by the time the Irish finished their second church, the community needed another! The Irish moved towards the lake from the riverfront.

“A time of opulence…” New Orleans reached a significant growth point in the 1850s. The port handled shipping second only to New York. While the international slave trade no longer legally existed, New Orleans became a focal point in the domestic trade of enslaved Africans. Wealthy planters maintained houses in the city, as well as on their upriver properties. Cotton dominated the economy (thanks to the labor of the enslaved). Additionally, the Irish kept coming from the Old Country. They worked along the riverfront.

This 1933 photo of St. John the Baptist Church offers a wonderful perspective from a couple of blocks away. The Pontchartrain Expressway now divides the neighborhood. This barrier didn’t exist in 1933. The church stands blocks away from the train station. Streetcars on the Dryades line traveled in front of the church. So, they connected church and school with uptown and further into downtown. Additionally, Dominican nuns from Ireland staffed the school. St. John the Baptist Church formed a nexus.