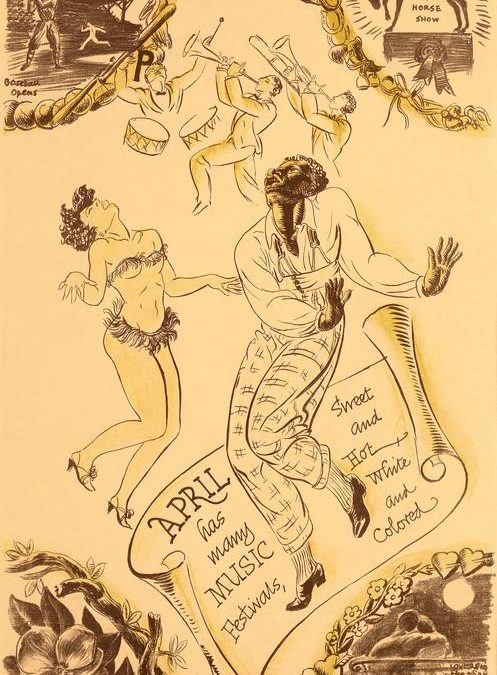 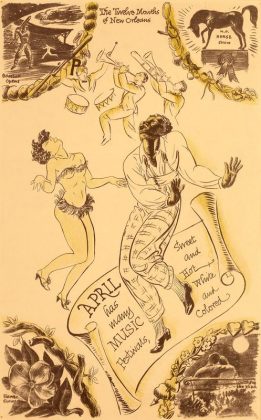 This image is the Fourth in a series of images by Enrique Alferez, published by Michael Higgins as “The Twelve Months of New Orleans.” Higgins published the illustrations in 1940. The image features dancers celebrating April’s spring festivals.

Alferez was born in Northern Mexico on May 4, 1901. He studied at the Art Institute of Chicago from 1927 to 1929. He came to New Orleans in 1929. Alferez made New Orleans his home. He took advantage of various Works Progress Administration grants in the late 1930s. Alferez created a number of sculptures in the metro area, particularly in New Orleans City Park. He also designed the large fountain in front of Shushan Airport (now New Orleans Lakefront Airport.

Alferez drew and painted, as well as sculpting. He included many New Orleans landmarks in the “Twelve Months” booklet.

Mardi Gras is over and March is all about Spring and Lent.

Bottom Left: “Flower Shows.” After Lent, every blooming flower offered an excuse for a show or festival. Competition between growers of specific varietals was intense.

Bottom Right: “Lovers in the Park” – Sitting out under a clear sky and full moon! Even before Daylight Saving Time, couples enjoyed Audubon and City Parks in the evening.

Easter Sunday broke the solemnity of Lent and Holy Week. Springtime bloomed, warmed, and excited New Orleanians. That meant hot jazz! Alferez recognized our desire to snap our fingers and dance. He presents a couple dancing to a jazz trio of drums, trumpet and trombone. Alferez captions the image:

April
has
many
MUSIC
Festivals
Sweet
and
Hot,
White
and
Colored

See you for the fifth image in May. 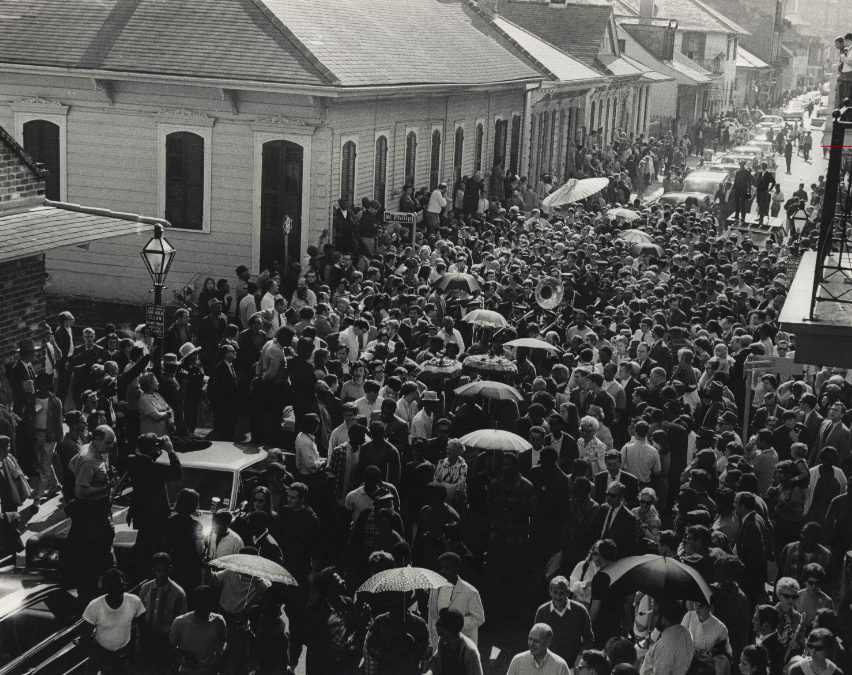 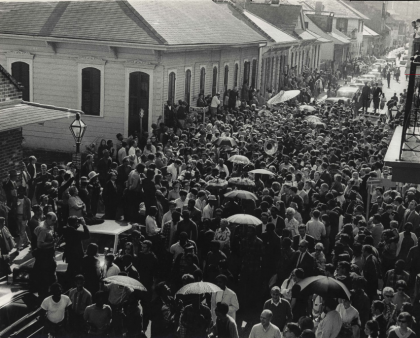 Alcide “Slow Drag” Pavageau was born in New Orleans, in 1888. He was related to many early Jazz musicians. While Pavageau began his career as a dancer, Alcide also played guitar with a number of early Jazz musicians. He learned double bass in 1927, constructing his own 3-string instrument, at the age of 39. At the age of 55, he joined George Lewis’ band, touring with him through the 1950s. Alcide also played with Bunk Johnson, in New York, in 1945. He spent time in the 1960s, playing with the Eureka Brass Band and at Preservation Hall.

Alcide passed at his home at 932 S. Ann Street, on January 20, 1969. The jazz community carried him home with a traditional jazz funeral on Wednesday, January 22nd. Alcide arrived at Morning Star Baptist Church at 910 Burgundy Street, for an 11am service. They brought him to St. Louis Cemetery No. 2 after the service. The Times-Picayune’s Marcelle B. Wright wrote of the day:

Clappng hands, tapping toes, brightly festooned parasols and a slow drag music — a traditional jazz funeral. Such was the scene when Alcide “Slow Drag” Pavageau took his last journey through the French Quarter. He was accompanied by hundreds of jazz fans who were bidding farewell to the veteran jazz musician.

Then came the las’ slo’ drag to old St. Louis Cemetery zNo. 2. Many of his fellow musicians, Chicken Henry, Harold Dejan, Fats Houston, Minor Anderson, Darreil Johnson, Kid Shiek Colar and Percy Humphrey joined in playing those old haunting spirituals: “Just a Closer Walk With Thee” and “The Old Rugged Cross.” And carrying through with tradition, the brass bands, with their second liners carrying multicolored umbrellas, led the crowd from the cemetery with the most popular, “When the Saints Go Marching In.”

“Marcelle B. Wright” later dropped her married name. You may know her and her work under her maiden name, Marcelle Bienvenu.

Pavageau got his nickname from his mastery of the “slow drag” dance step. Since double bass wasn’t a practical instrument to play in parades, Alcide took up the job of Grand Marshal. He led many a parade and jazz funeral with his famous slow drag step. 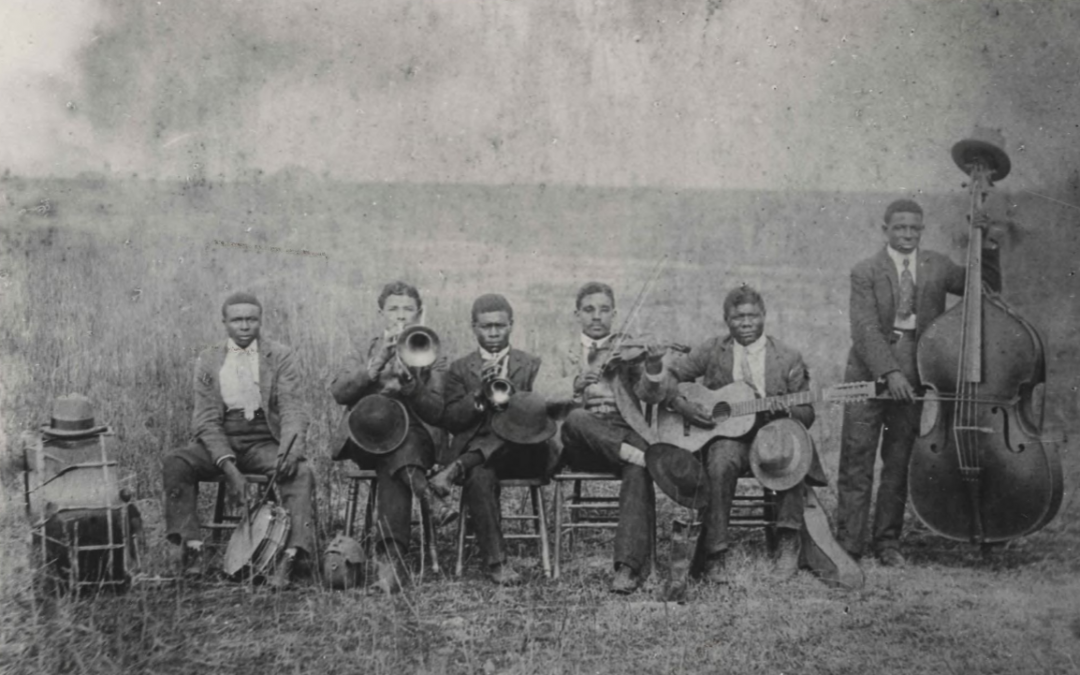 Kid Ory Band LaPlace from around 1910. 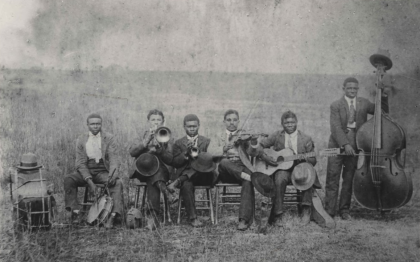 Photo from around 1910 of Edward “Kid” Ory and his band. They’re in a field in LaPlace, Louisiana, where Ory grew up. The band members include (l-r) Ed Robinson (drums), Ory, Lewis Matthews (cornet), Emile Bigard (violin). Stonewall Matthews (guitar). The bassist is only identified as “Foster.”

Ory’s band travled into New Orleans on Saturday mornings. They “tailgated,” riding in wagons, promoting their gigs. Additionally, the band busked for tips around the fishing camps in Milneburg. Ory later moved to New Orleans. He lived with his sister. King Bolden tried to recruit the Kid to play in his band, but his sister insisted he finish school first.

Kid Ory lived on the land formerly occupied by Woodland Plantation in LaPlace. The main house re-opens today as the 1811/Kid Ory House. From the press release for today’s event:

Two permanent exhibits tell the stories of the 1811 German Coast uprising of enslaved people and the life of jazz pioneer Kid Ory, born on the plantation in 1886. Exhibit Room I features Stomping Grounds: Mules at Work in Southeast Louisiana, also explores the role of draft animals and sugar production in the area after the Civil War. Exhibit Room II features photographs of regional culture. Patrons can find a selection of Kid Ory’s music on vinyl, CD, and 78rpm recordings as well as books, handmade string instruments, vintage phonographs, cards, photographs, and art.

45-minute tours of the 4,000 sq. ft. historic home begins at 11 am. Admission into the museum is $15. While the ribbon-cutting ceremony is outside, masks and social distancing are strongly encouraged. Masks are required inside the building, and tour size is limited to four. 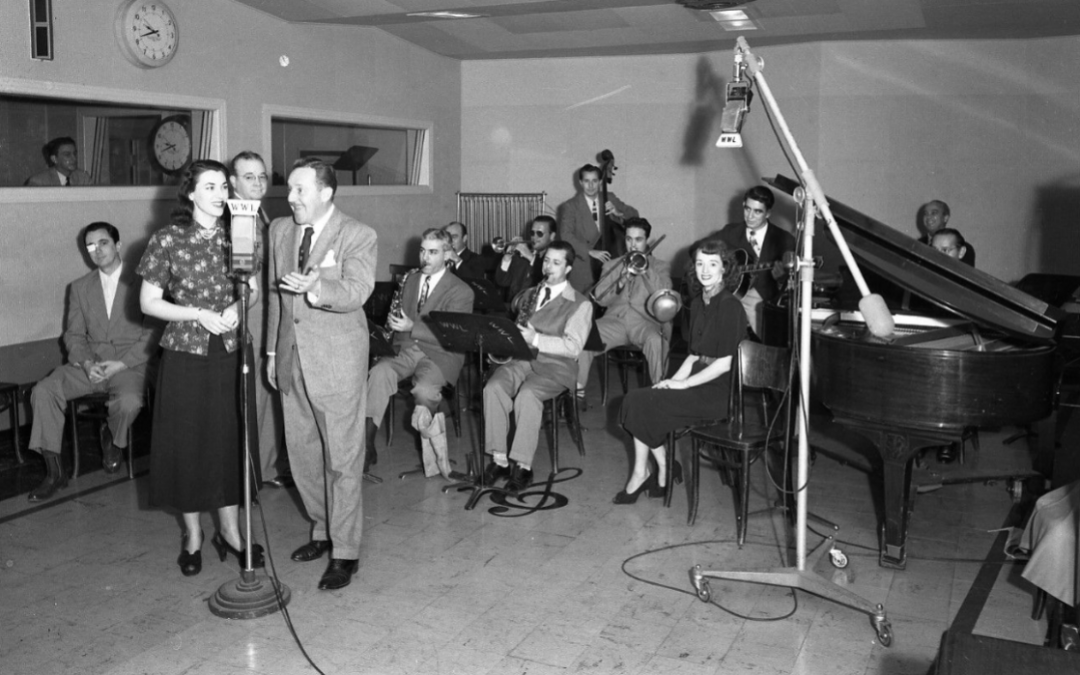 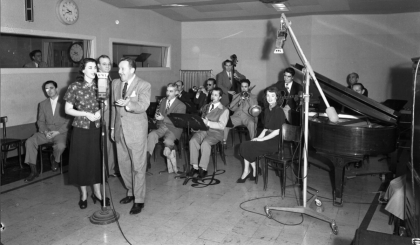 The “Dawnbusters” radio program debuted on WWL in 1937. It was that era’s version televsion’s “Today” show, or “Good Morning America.” Since many people commuting to work in the 1930s did so via public transit, Dawnbusters wasn’t “drive-time” radio as we know it now. In the photo, Margie O’Dair chats with Henry Dupre, as bandleader Pinky Vidacovich watches. Do you remember “Dawnbusters?”

The first commercial radio station in New Orleans began as a student effort at Loyola University in New Orleans. WWL broadcast from the Loyola campus with a ten-watt transmitter in 1922. The station grew in size and programming through the 1920s. By 1935, WWL joined the CBS Radio Network. The station left the uptown for a larger studio in the Fairmont Hotel (now the Roosevelt). While the station first signed on at 833KHZ, WWL moved to 870KHZ in 1941. It remains at 870 to this day.

Station operations at the Fairmont Hotel offered WWL options unavailable at Loyola. Additionally, WWL broadcast big-band and other concerts from the hotel’s popular nightclub, the Blue Room. WWL received “clear-channel” status, meaning no other radio station in the country operated on 870KHZ.

Henry Dupre hosted WWL Radio Dawnbusters for the entire run of the show. A graduate of Jesuit New Orleans, he moved to New York to pursue an acting career. Henry returned to New Orleans in 1932. WWL hired Dupre that year. By 1937, he took charge of the morning show.

Dawnbusters presented both news and entertainment to the morning listeners. The show featured a full orchestra, conducted by Irving “Pinky” Vidacovich. In addition to his role as bandleader, Vidacovich performed skits as various characters. The show welcomed guest appearances by musicians as Al Hirt and Frankie Ford over the years.

WWL Radio Dawnbusters ended its run in 1957. Dupre moved over to WWL-TV at that time. He hosted a morning cartoon show for children. Dupre hosted “Popeye and Pals” as “Uncle Henry,” from 1957 until his retirement in 1964. The program continued until 1991. 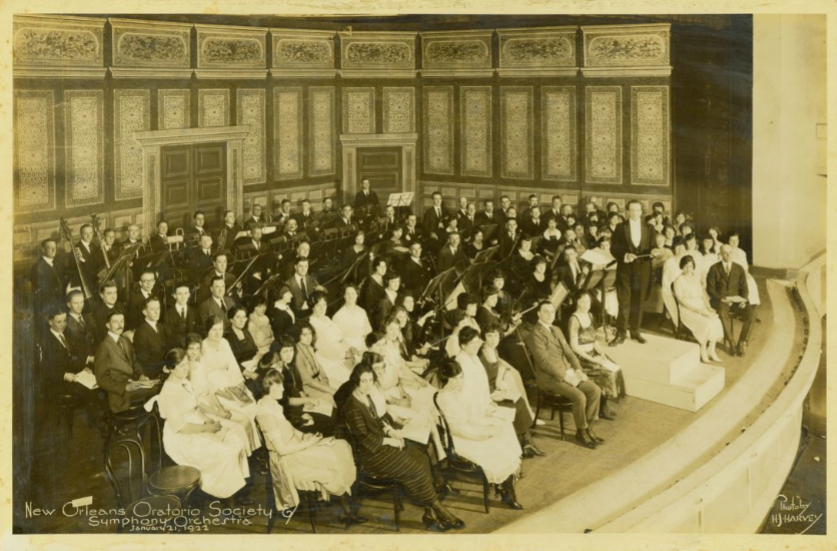 The New Orleans Oratorio Society posed for a portrait in 1922. 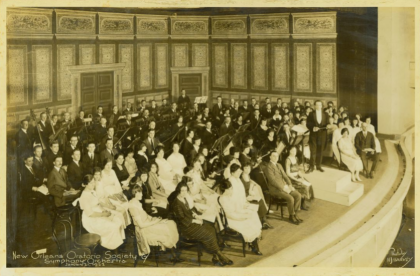 Photographer H. J. Harvey posed the New Orleans Oratorio Society and Symphony Orchestra for a group portrait on 21-January-1922. The concert hall is unidentified. In 1922, the Musical Blue Book of America lists Ernest E. Schuyten as the conductor of the Society:

While other organizations and individuals list addresses, Schuyten does not.

An Oratorio is “a large-scale musical work for orchestra and voices, typically a narrative on a religious theme, performed without the use of costumes, scenery, or action. Well-known examples include Bach’s Christmas Oratorio, Handel’s Messiah, and Haydn’s The Creation.” So, it’s unclear if the New Orleans Oratorio Society is a part of the New Orleans Symphony Association, or if it was separate in the 1920s. 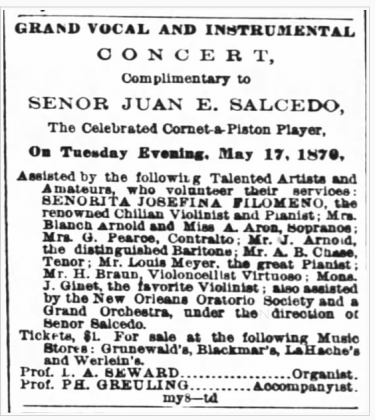 On 10-May-1870, the New Orleans Times-Picayune newspaper advertised a performance by Señor Juan E. Salcedo, “The Celebrated Cornet-a-Piston Player.” The performance was “also assisted by the New Orleans Oratorio Society and a Grand Orchestra.” Tickets were one dollar, and available at Grunewald’s, Blackmar’s, LaHache’s and Werlein’s. One would assume interested parties were told the location of the performance at the music stores where tickets were sold. Señor Salcedo offered this performance on 17-May-1870.

So, in this 1870 ad, it appears that the Society existed separately from the orchestras of the period. It’s unclear whether this 1870 incarnation of the Society is the same as in 1921.

The photo offers insight into fashions in the 1920s. Notice the bobbed hairstyles for the women. Both musicians and singers wear dressy clothes, but not evening wear. The conductor, who is likely Mr. Schuyten, is in white tie and tails.

We had our first NOLA Book Club gathering and discussion last night! Join us on Twitter, @NOLAbook, or on Facebook, for info on future gatherings.

EDITOR’S NOTE: This post was scheduled for yesterday, 21-January, but I messed up the scheduling. So, today, you get a twofer. 🙂 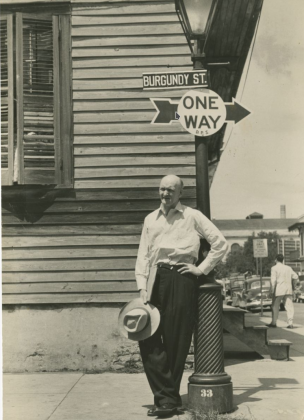 William Russell, shown here standing on Rue Burgundy, was a composer, musician, and jazz historian. He was born in Canton, MO, in 1905. Russell developed a reputation for his percussion composition skills. While his “Fugue for eight percussion instruments” played Carnegie Hall in 1933, Russell is best known in New Orleans for his work preserving and nurturing early jazz.

Bill Russell moved to New Orleans in 1956. He lived in the Quarter. Russell opened a record shop, and did violin repairs. He became a member of the New Orleans Ragtime Orchestra. Two years later, he co-founded the Hogan Jazz Archive, one of the special collections archives at the Howard-Tilton Library at Tulane University. He became the first curator of that archive.

Because Russell was of an age with many of the early jazz musicians, he became friends with Pops, Mahalia, George Lewis, and Baby Dodds.

This photo, courtesy of the Hogan Jazz Archive Photography Collection, shows Russell leaning on a lamppost on Burgundy Street. While the photo is undated, the street furniture puts it in the late 1950s.

Bill Russell passed away in 1992, at the age of 87. His contributions to New Orleans Jazz remain significant today.