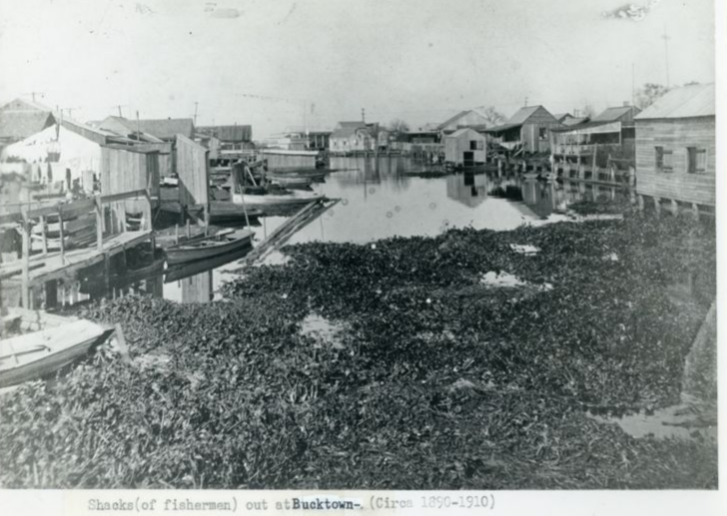 Bucktown 1900 was a fishermen’s village at the end of the 17th Street Canal. 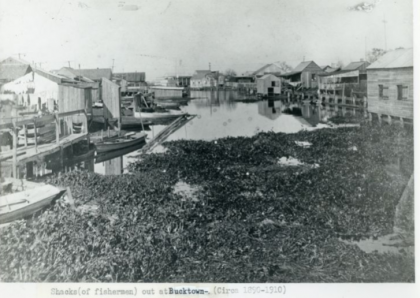 Photo of shacks along both sides of the 17th Street Canal in Bucktown 1900. Source is the New Orleans Jazz Club. While the photographer is unidentified, the note at the bottom is similar to a number of images in Doc Souchon’s collection. The photographer stands several blocks back from the entrance of the canal at Lake Pontchartrain. The plant growth in the foreground is foliage from the swampy ground in the area. The fishermen kept the canal clear for their boats from here to the lake.

The canal gets its name from 17th Street, in the “uptown backatown” part of New Orleans. While the city changed the street’s name to Palmetto Street in 1894, the old name stuck for the canal. Rainwater from uptown collected in smaller canals, eventually draining into this one. Since land was higher closer to the river, gravity did most of the work for decades. Water flowed into the canal, which in turn flowed out to the lake. There was little development along the 17th Street Canal in the 19th Century. So, by the time the canal reached the lake, the water dissipated into swampy ground. The city built a pumping station across the canal, near Metairie Road. Station #6 opened in 1899, using pumps designed by A. Baldwin Wood.

Connecting the canal to the lake offered an opportunity to fishermen. Even though the New Canal wasn’t that far away, that waterway was navigable. With luggers, tugs, barges, and other vessels traversed it daily. That presented challenges for the fishermen. Moving over to the outfall canal enabled the fishermen to come and go into the lake at their leisure. By the 1890s, fishermen built shacks with small piers for their boats, moving into this, the “East End” of Jefferson Parish. As the area grew, commercial buildings popped up. That lead to restaurants and nightclubs. Those businesses meant gambling and jazz, but that’s another story.