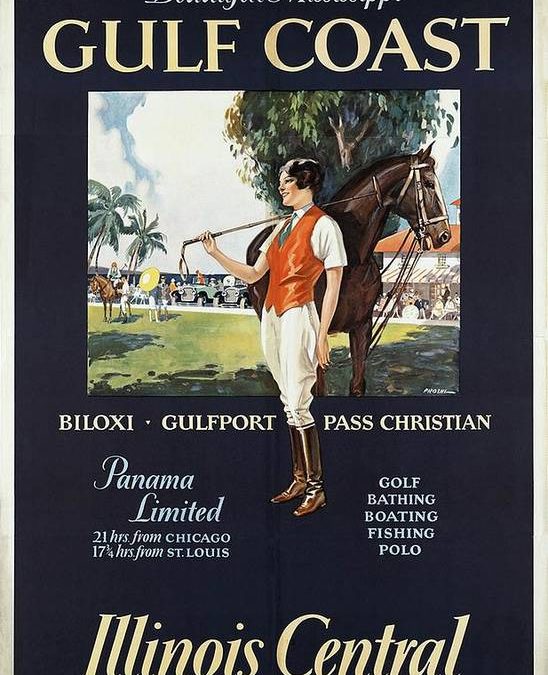 The Illinois Central Railroad operated the Panama Limited from Chicago to New Orleans. 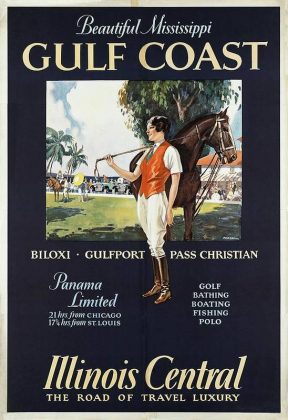 Travel poster advertising the Panama Limited railroad route, 1929. The Illinois Central Railroad (IC) operated the route. The train ran from Chicago to New Orleans and return. The trip ran overnight, departing Chicago in the afternoon, arriving in New Orleans the next morning.

Illinois Central featured the Panama Limited as its flagship route. The train operated in “limited” service, running a consist of sleeper, diner, lounge, and observation cars. Since it was a luxury train, its advertising appealed to passengers with means. Travel to New Orleans, they suggested. Escape the stifling Summer heat of the big city with activities along the Gulf Coast! Come golf, swim, sail, fish, even play polo!

The IC operated their Chicago-New Orleans service as the Chicago and New Orleans Limited. On February 4, 1911, the railroad changed the route’s name in honor of the Panama Canal. Even though the canal did not open for another three years, the IC made a big deal of the achievement. A year later, in 1912, IC rolled out new equipment for the route. They solidified the route as an exclusive, first-class train. It made the trip in twenty-five hours.

The train transitioned to diesel and streamlined equipment in 1942. The 1944 timetable shows the train departed at 3:15pm, arriving in New Orleans at 9:15am the next morning.

When Amtrak took over passenger rail service in 1971, they dropped the route. The new entity retained the day train, the City of New Orleans. Later that year, Amtrak revived the Panama Limited, returning the schedule to an overnight run. In 1972, they once again dropped the Panama Limited name. Amtrak returned to the name, City of New Orleans, in the hopes they could leverage the popularity of Arlo Guthrie’s song of the same name.

The current Chicago to New Orleans trip on Amtrak’s City of New Orleans departs Chicago at 8:05pm, arriving in Union Passenger Terminal in New Orleans at 3:47pm the following day, for a total trip of 19 hours and 42 minutes.