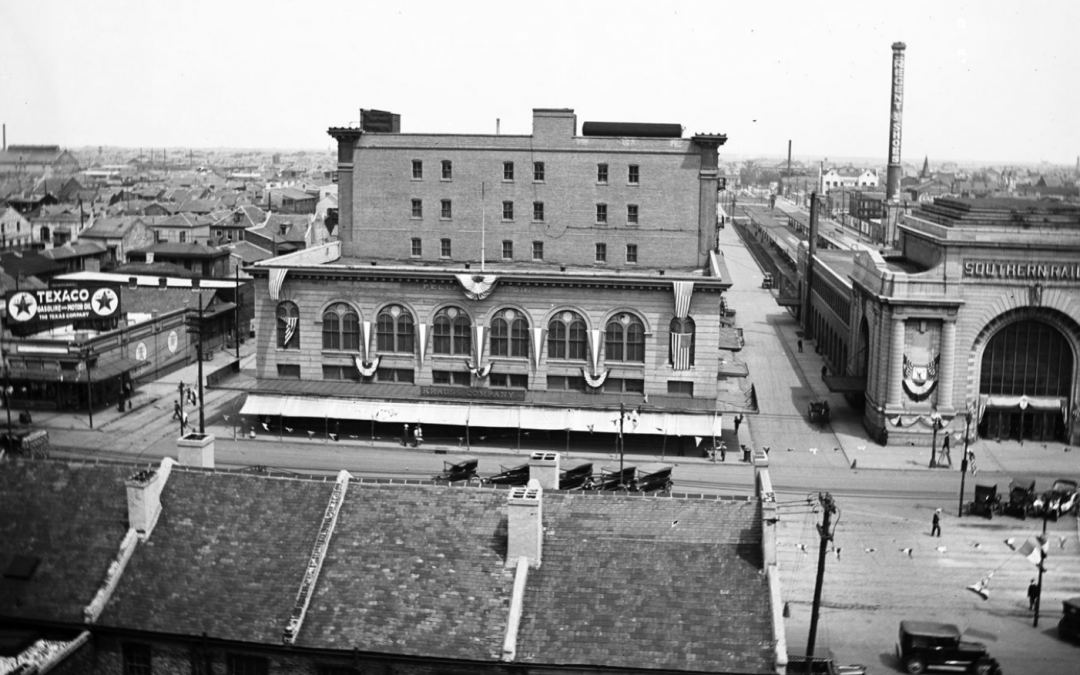 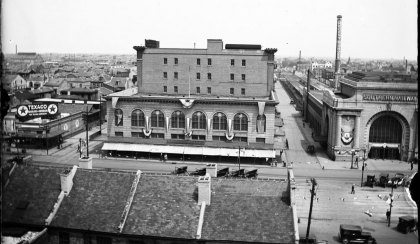 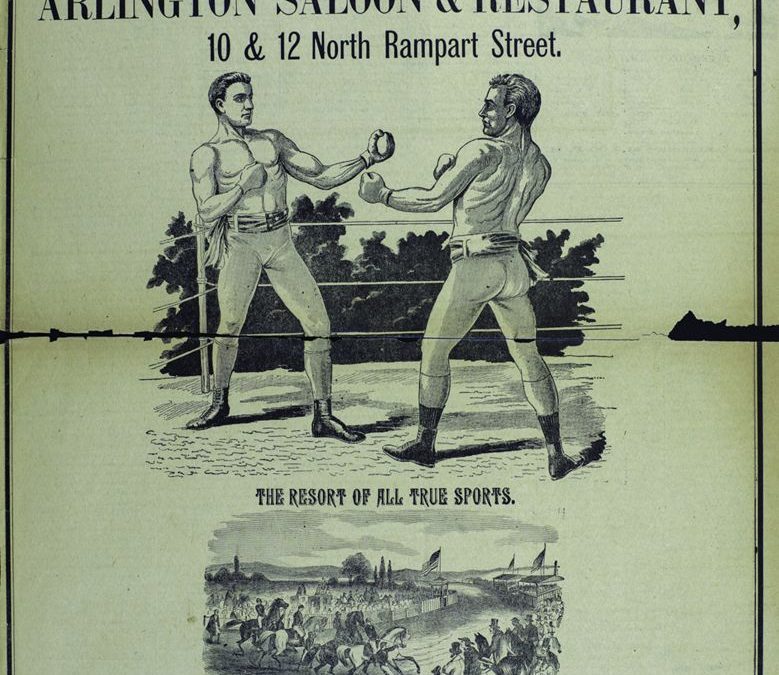 Tom Anderson advertised his Arlington Saloon in The Mascot.

Ad for the Arlington Saloon and Restaurant, 10-12 N. Rampart Street (later 112 N. Rampart, when the city’s address scheme changed) in the 3-April-1897 edition of The Mascot. Anderson and the saloon’s namesake, Josie Arlington, were two of the most well-known personalities of the Storyville District.

Thomas “Tom” Anderson developed extensive business and political connections while working for the Louisiana Lottery Corporation in the 1880s. He leveraged those connections, opening his first saloon in 1891. While he represented the Fourth Ward in the Louisiana Legislature, he didn’t serve until 1904. So, he wasn’t part of the government when The District opened. Anderson listened, watched, invested, and profited.

One of Anderson’s early business partnerships was with Josie Lobrano. Lobrano operated a bordello on Basin Street. Anderson invested in the bordello. Josie Lobrano later went by the name Arlington.

This establishment, located outside Storyville, immediately grew in popularity. The saloon offered booths for customers seeking privacy. Anderson developed a reputation for keeping his mouth shut. So, politicians, cops, and businessmen met at the saloon. No doubt Anderson picked up useful tips from those meetings. The Arlington Saloon and Restaurant boasted “the latest tips on the races.” Sports bettors regularly frequented the Arlington.

The Arlington enabled Anderson to open up additional businesses in The District. He partnered with Billy Struve, a reporter for the New Orleans Daily Item,  in The Astoria, an establishment on S. Rampart Street. They later purchased the building at the corner of Customhouse (now Iberville) and Basin Street. They named this saloon, Arlington Annex. This saloon eventually overshadowed the original Arlington. Since it was in The District, the Annex appeared in more illustrations and photographs.

This newspaper was, if you will, a forerunner to modern music and entertainment papers like Offbeat and The Gambit. 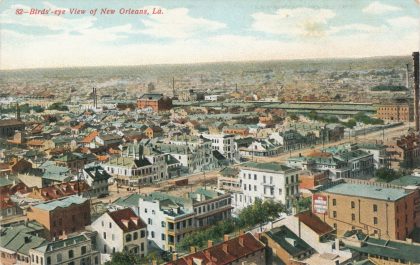 View of the Storyville District, ca 1900.

This postcard, published by C.B. Mason, shows the Storyville District, three to five years after it’s creation (legally). Here’s the note on the postcard:

View from high building on Canal Street looking towards “Storyville” district. Of particular interest is the row of buildings seen fronting Basin Street, including Tom Anderson’s Josie Arlington’s and Lulu White’s, and “the District” behind it. This is one of the few published cards showing what history recalls as “Storyville”.

There are a lot of shots of Storyville, the section of Faubourg Treme from Canal Street to the Carondelet Canal, but this one of Basin Street 1900 caught my eye for several reasons. The photographer stands on a building on Canal Street. It looks like he’s on the old Mercier Building, at 901 Canal. This was Maison Blanche, before S.J. Shwartz demolished it and built his larger store and office building. This photo shows the neighborhood just before Leon Fellman builds the 2-story retail building at 1201 Canal Street. That building becomes Krauss Department Store. 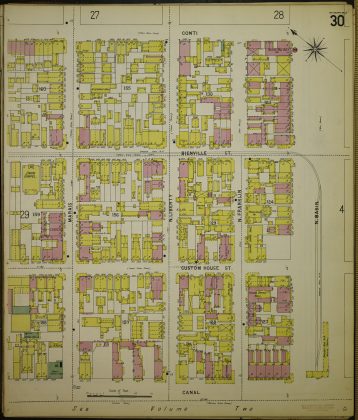 Trains didn’t travel much on Basin Street 1900. The big passenger terminal opens in 1908. The first two blocks off Canal, Basin to Customhouse (now Iberville), then to Bienville, supported the excursion train to Spanish Fort. So, this 1896 Sanborn map shows the tracks and small station for that Spanish Fort train. Passengers boarded at Canal, then the tracks turned lakebound on Bienville. Note the buildings in the 1201 block of Canal. The Krauss building isn’t there yet. Furthermore, it was a lot quieter at this time, without the trains.

Zoom of the CB Mason Postcard of Storyville, 1900ish

This zoom of the postcard shows the same area of the well-known, “Basin Street Down the Line” photo. Two horse-drawn carriages or wagons head riverbound on Custom House. First of all, that’s Tom Anderson’s Saloon behind them, on the corner. Then, in the middle of the street, there’s a passenger stand and shed, for the railroad. So, the tracks are visible. 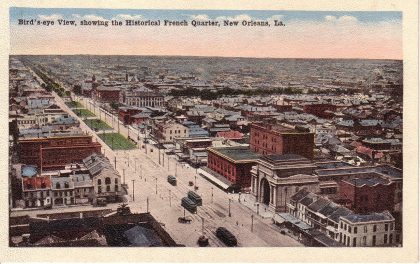 1911 view of Canal and Basin Streets

This 1911 postcard shows the changes within a decade. Krauss Department Store stands at 1201. So, Terminal Station swallows up Basin street for blocks. The New Orleans and North Eastern (NO&NE) Railroad moved over from Press Street in the Bywater to Canal Street. NO&NE became part of the Southern Railway system in 1916. As a result of the merger, the station’s main sign changed to reflect the merger. 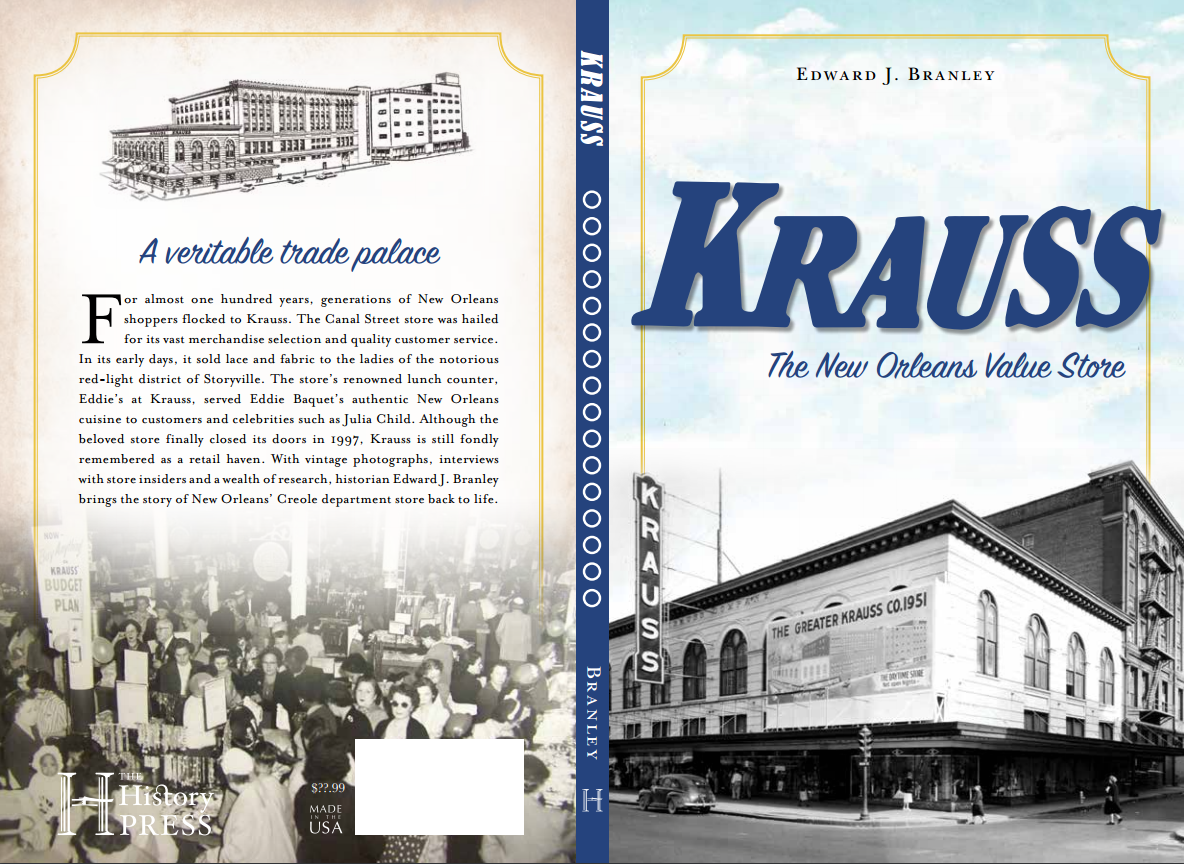 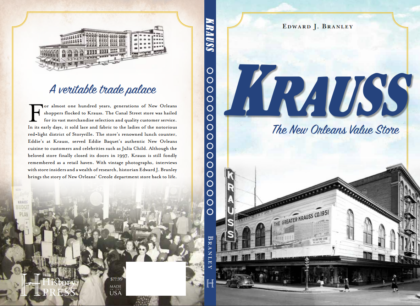 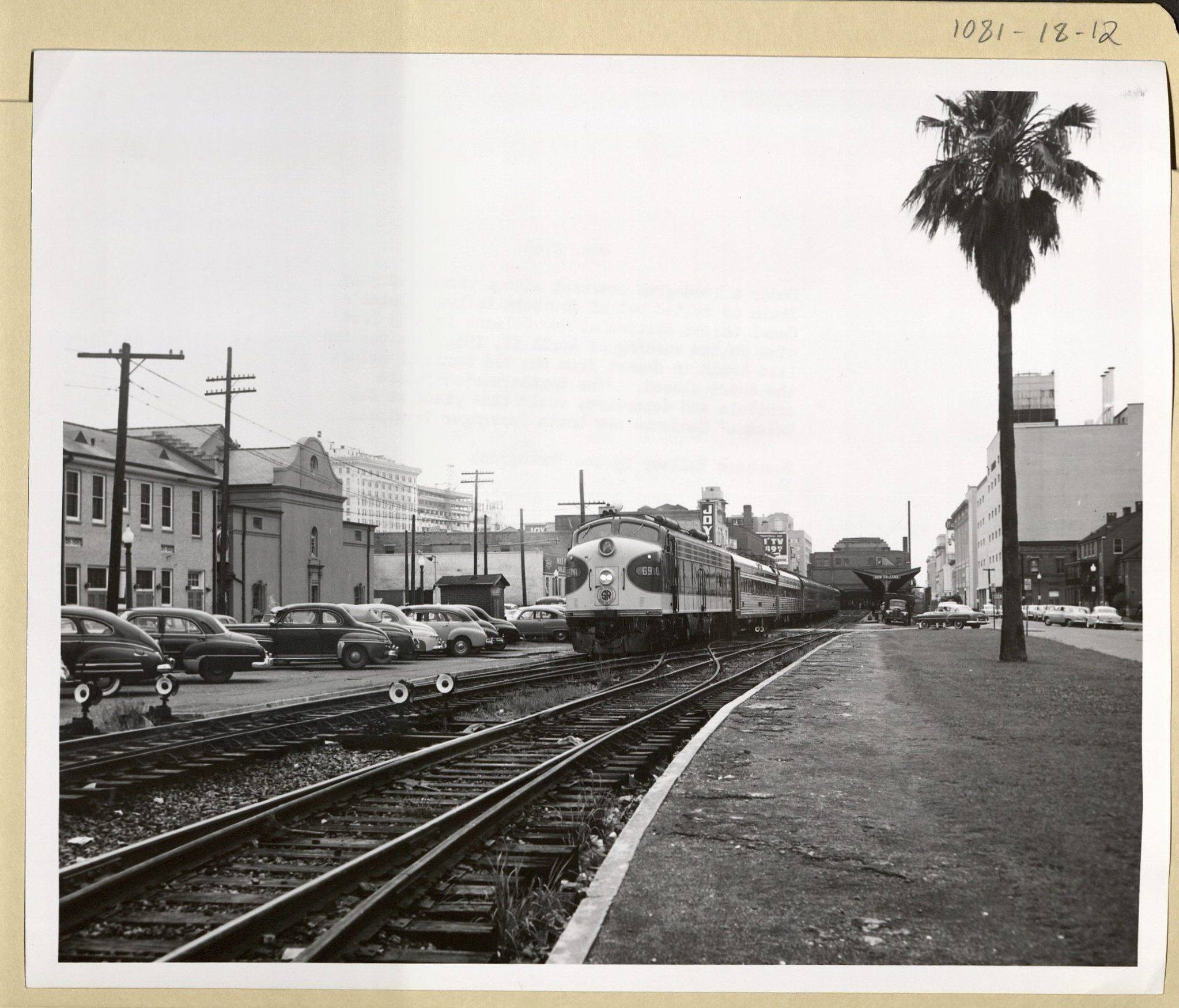 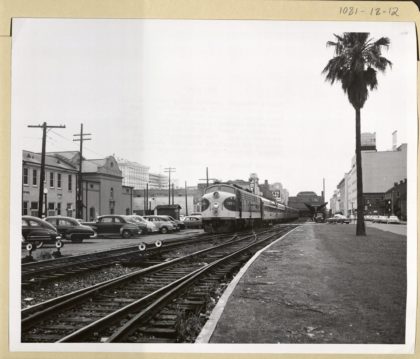 The Southerner was the last train to leave Terminal Station on Canal Street. (courtesy Tulane’s LaRC)

Tulane’s Louisiana Resource Collection shared some important photos in Louisiana railroad history for April 16. The first photo is of Southern Railroad’s Train #48, better known as “The Southerner.” The Southerner was a “limited” train that ran from New Orleans to New York City. The train began operation in 1941, using EMD E6 engines and brand=new, corrugated-sided cars from Pullman-Standard.

The photo above shows the last Southerner leaving Terminal Station, on April 16, 1954. The Illinois Central and Kansas City Southern railroads had already moved their operations to Union Passenger Terminal on Loyola. When The Southerner departed on April 16th, Southern Railroad’s inbound trains were re-routed to their new home on Loyola Avenue. 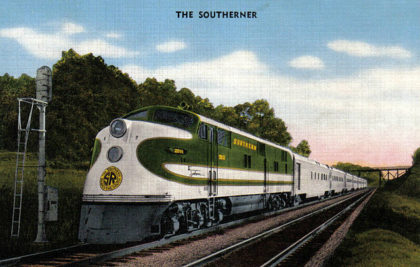 The Southerner, on its way to New York (Wikimedia Commons)

Terminal Station was built on Canal Street in 1908. It serviced the Southern and Gulf, Mobile and Ohio railroads. So, in the black-and-white photo above, the photographer stands on the Basin Street neutral ground, behind the stations’s platforms. Krauss Department Store is visible on the right. 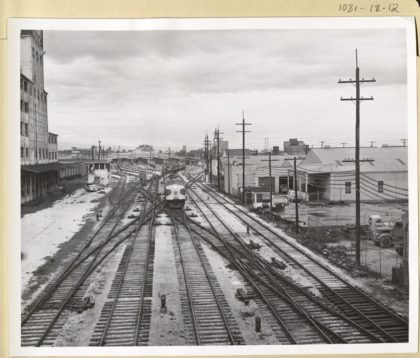 The first Southern Railroad train to enter Union Passenger Terminal was “The Pelican.” The Pelican also ran from New Orleans to NYC, but its consist was an luxury affair. It used sleeper cars owned by Pullman-Standard. There were no coach cars.  The tracks coming into UPT include a “wye” track. While the incoming trains came in engine-first, they turned around on the wye. Then the engines backed into the platforms. 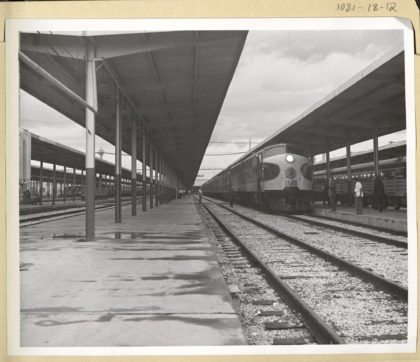 The Mayor of New Orleans in the 1950s was deLessepps Story Morrison. He was one of the biggest proponents of a single train station for the city. New Orleans had five stations around the city. Union Passenger Terminal remains in use by Amtrak and the Greyhound Bus company today. 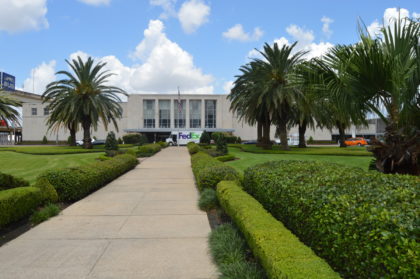 Terminal Station was still nine years away when Leon Fellman bought the buildings in the 1200 block of Canal Street in 1899, and five years away when Krauss opened in 1903. The station had a wonderful symbiotic relationship with the store for all those years. You forgot something for your trip to New Orleans, and there was this department store with absolutely everything right next door when you got off the train! The concierges and staffs at the downtown hotels also knew this, and regularly steered guests to Krauss for those last-minute essentials and other purchases.

Visitors to the City

There is so much more to the story of UPT, and we’ll go more in-depth on that at some point. When the landscape of even a few blocks changes, like the area around Krauss after Terminal Station vanished, it’s important to make the connections. Krauss had the next-door neighbor connection to the Southern Railway and Gulf, Mobile and Ohio, both of which came into the station on Basin Street. Passengers coming to Canal Street from Union Station on Howard Avenue came to S. Rampart and Canal, just a block from Krauss. The buyers at Krauss knew this, and made sure the visitors saw enticing goods as they passed by.