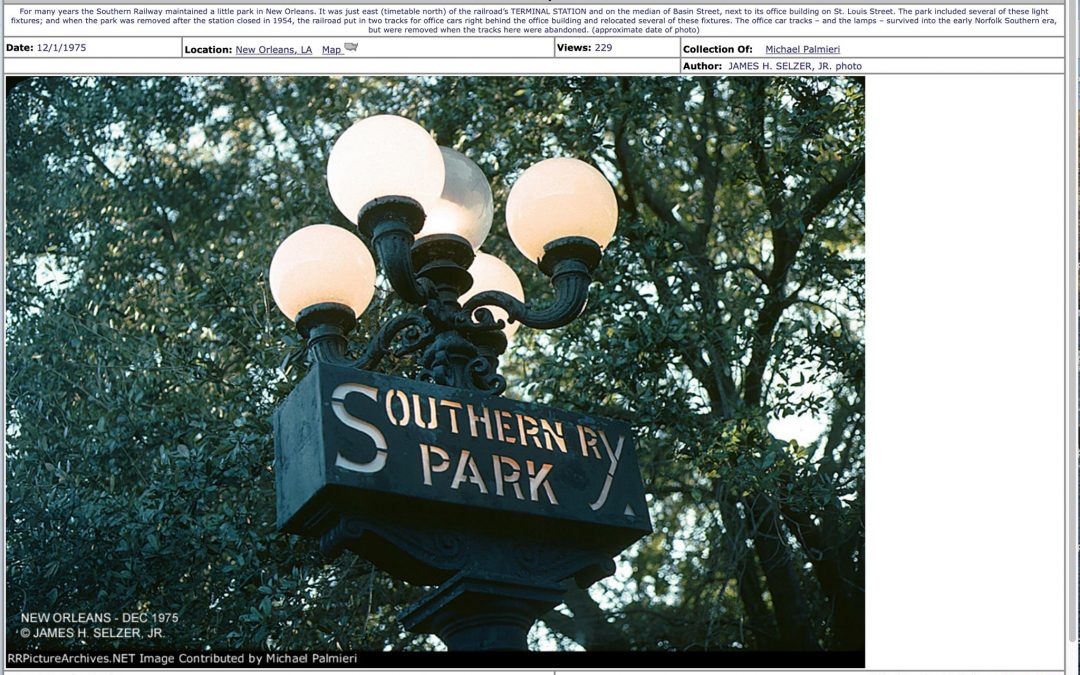 Southern Railway Park stood just off from the tracks leading to Terminal Station. 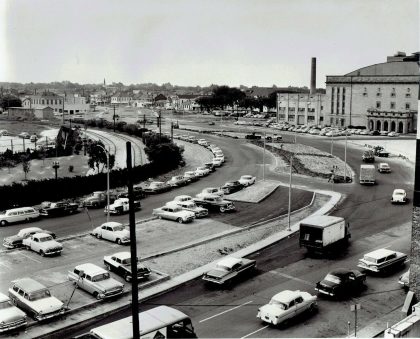 Franck Studios photos of Basin Street turning towards the lake in the late 1950s. The two parking tracks inside Southern Railway Park are visible on the left. Prior to 1954, railroad tracks leading out of Terminal Station at Canal and Basin Streets followed Basin, down to just before St. Louis Street. They turned lakebound at that point, heading into Mid-City. They connected with the “Back Belt” tracks, where trains turned east to cross the Industrial Canal and Lake Pontchartrain.

The New Orleans Terminal Company (NOTC) built a railroad passenger station on Canal Street in 1908. Southern Railway assumed control of the station when it acquired NOTC in 1916. Southern shifted their operations from Press Street Station in the Bywater to Faubourg Treme. Tracks ran along Basin from Canal Street to St. Louis. Additionally, Southern built a freight station, just before the tracks curved north. That station stood at 501 Basin, just out of the frame of these photos, on the left. A private concern purchased the freight building in the early 2000s, converting it into Basin Street Station, a visitors center and event venue. 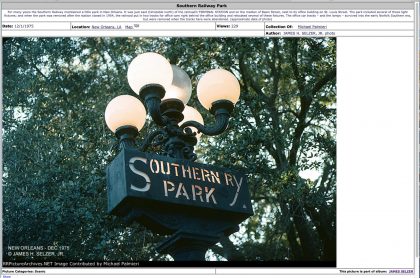 After trains for Southern Railway (or Gulf, Mobile, and Ohio, the other railroad using Terminal Station) unloaded their passengers, they pulled off to a service yard. Engines pulled the train up past the Municipal Auditorium, then backed the cars into a side yard. Additionally, Southern trains carried “business cars” throughout the system. These cars looked like open-ended observation cars. They contained offices, bedrooms, and a kitchen. Railroad executives used these cars to travel the system.

When business cars came to New Orleans, the railroad parked them next to the passenger car service yard. Those tracks terminated in Southern Railway Park. The executives got a landscaped area  where they could stretch their legs, or take a car to other parts of the city.

In 1954, the city consolidated passenger rail operations at Union Passenger Terminal, on Loyola Avenue. The city ordered the demolition of the five existing passenger stations. Southern Railway relocated the business car parking tracks to the location in this photo. They also moved several of the light fixtures like the one in this James H. Selzer photo from 1975.

Thanks to Mr. Maunsel White for sharing these photos on Facebook. 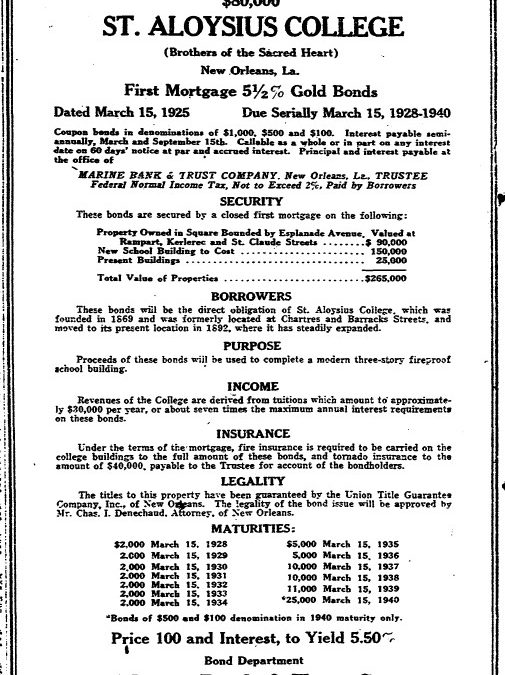 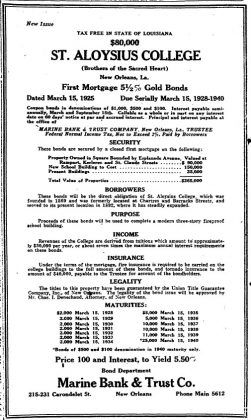 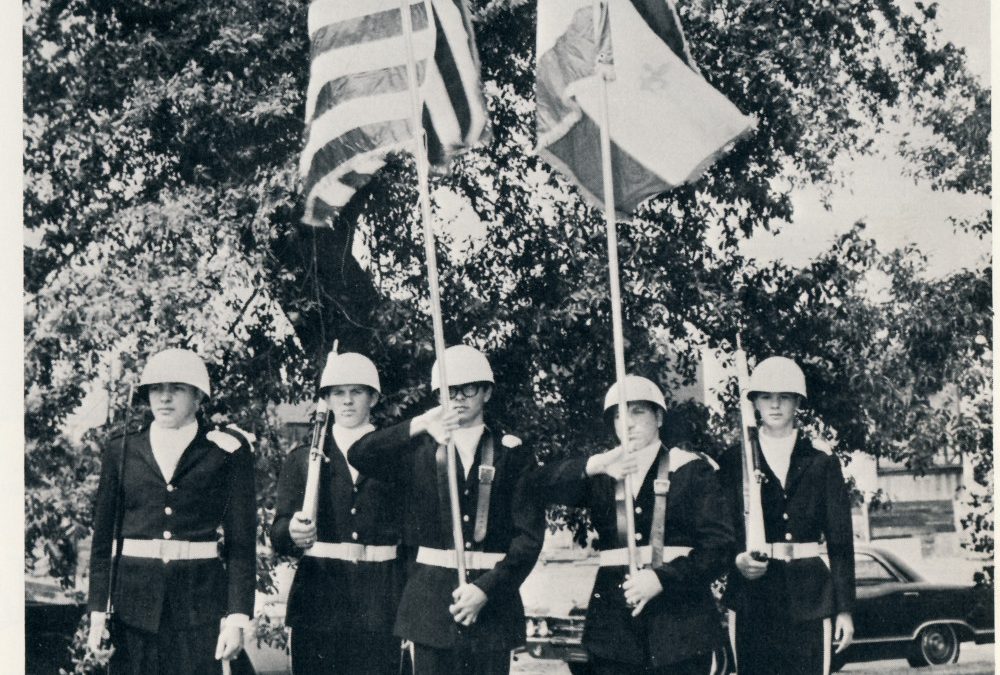 The St. Aloysius Color Guard was a military-style unit in the mid-1960s. 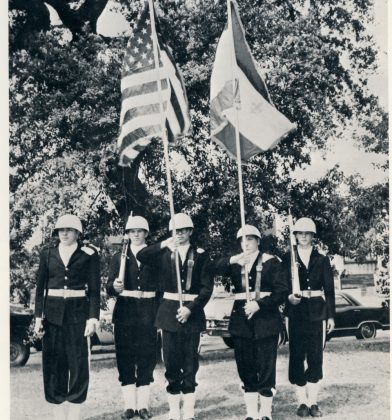 From the book: “Color Guard. Prior to the activation of the school’s NJROTC unit, the St. Aloysius Band also included a Color Guard for presenting the American flag at football games, Carnival parades, and other events.” The unit consisted of a commander (left), two rifle escorts, and color bearers carrying the United States flag and the flag of the City of New Orleans. The 1966 Crusader yearbook staff shot this photo on the Esplanade Avenue neutral ground. Students in the unit are unidentified; if you know who these young men are, please let me know!

In 1967, the Brothers of the Sacred Heart announced an arrangement with the United States Navy to establish a Naval Junior Reserve Officers Training Corp (NJROTC) unit at St. Aloysius High School. Participation in the unit was mandatory for Crusaders in grades 10, 11, and 12. The school adopted the Navy’s khaki undress uniform for all grades.

When St. Aloysius and Cor Jesu merged to form Brother Martin High, the NJROTC unit moved to Elysian Fields. The band and the color guard adopted the NJROTC uniforms for public events. The band wore the NJROTC service dress blue uniform. This consisted of navy blue wool trousers and a double-breasted wool jacket, with six buttons. Band members wore a white, long-sleeved shirt and a black necktie with the suit. Their covers were a naval officers style “combination cap” with a white cover. Ranks were indicated by insignia on the jacket sleeves. Officers wore thin stripes near the jacket cuff. Chief Petty Officers wore a CPO-style insignia on the upper sleeve. The band’s Drum Major held the rank of Cadet Lieutenant, and the commander of the color guard was a Cadet Lieutenant (Junior Grade).

BMHS kept the NJROTC uniforms for the band through the 1975-76 school year. 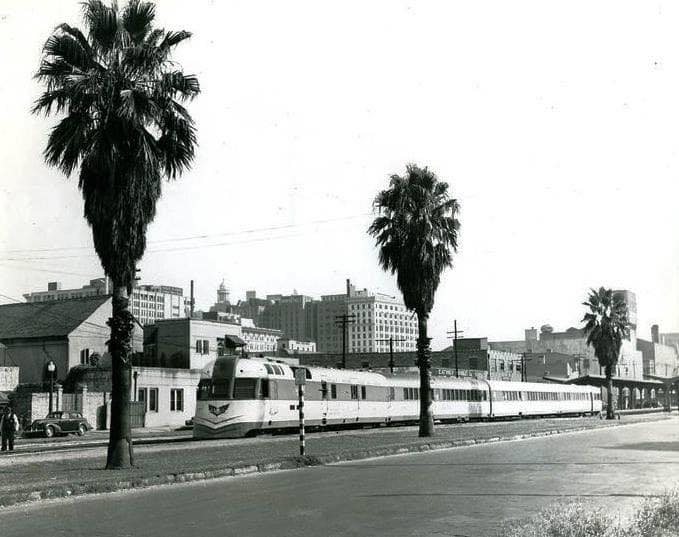 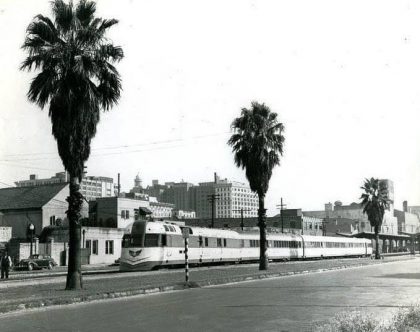 The “Rebel,” operated by Gulf, Mobile, and Northern Railroad, at Terminal Station in Faubourg Treme, late 1930s, early 1940s. It’s unclear whether this train is departing on a northbound run, or backing into the station, arriving on the southbound run. Trains approaching Terminal Station used a “wye” track on St. Louis Street to change directions. The inbound train entered the wye, then backed in. Passengers exited onto Canal Street, across from Krauss Department Store.

The Gulf, Mobile, and Northern operated the Rebel from 1935 until its merger with the Mobile and Ohio Railroad in 1942. GM&N expanded the Rebel. They purchased additional equipment, operating a split of the route, from Union, Mississippi, to Mobile. The GM&O expanded the Rebel Route further, north to St. Louis. The train’s final incarnation, the “Gulf Coast Rebel” ended service in 1958.

The railroad acquired a third trainset in 1937. This trainset enabled GM&N to operate the split at Union, down to Mobile.

With the merger in 1942, GM&O discontinued the “little Rebel” trainsets. The railroad replaced them with the “Big Rebels,” Alco DL-105 locomotives and standard-style cars. 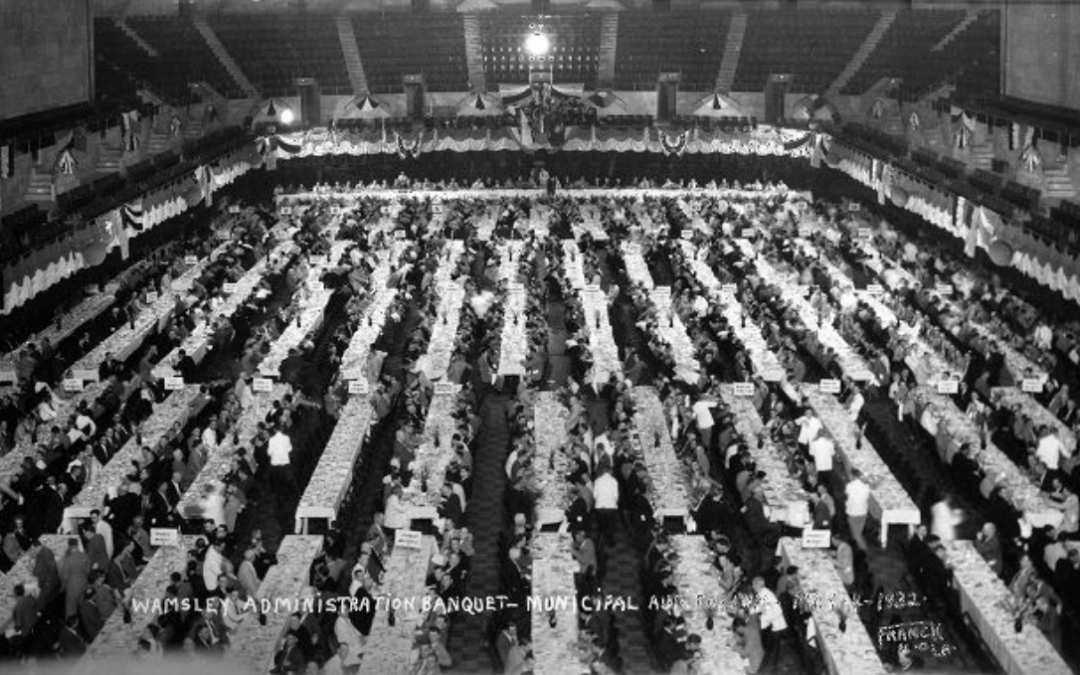 The Walmsley administration held a banquet at the Municipal Auditorium in 1932.

Franck Studios photo of the New Orleans Municipal Auditorium in 1932. The city opened the facility on May 30, 1930. Since it opened, the Municipal Auditorium hosted a wide range of events, including Carnival balls, boxing matches, high school graduations, professional wrestling, as well as trade shows and conventions. The building sits in Faubourg Treme, next to Congo Square.

The Municipal Auditorium seats over 7800 people in its arena configuration. The city used the facility as a starting point for several professional sports franchises. The auditorium served as home court for the American Basketball Association’s New Orleans Buccaneers, during the team’s 1969-1970 season. When the National Basketball Association granted New Orleans a franchise, the New Orleans Jazz played their first season in the facility. The New Orleans Brass, an East Coast Hockey League (AA) team, used the auditorium as home ice from 1997 to 1999.

What attracted these teams to the facility was the ease with which it could be adapted. The Bucs originally played at the old Loyola Field House, but outgrew it. The Jazz planned to use the Louisiana Superdome, but decided to wait a season. That enabled the team’s management to prepare for Dome life. While the Brass were a professional team, they knew the Dome would be impractical. They used the auditorium until the opening of the Smoothie King Center.

Harrah’s New Orleans Casino planned to use the Municipal Auditorium as a temporary site, while they demolished the Rivergate convention center and built their current casino on that site. The temporary casino only operated for a couple of months in 1995.

Thomas Semmes Walmsley held the office of Mayor of New Orleans from 1929 to 1936. Walmsley was a controversial figure, being a staunch racist. Interestingly, Walmsley was a member of the Boston Club, the luncheon club located on Canal Street that is closely identified with the Mystick Krewe of Comus. Hosting a political event in the city’s new auditorium was quite logical.