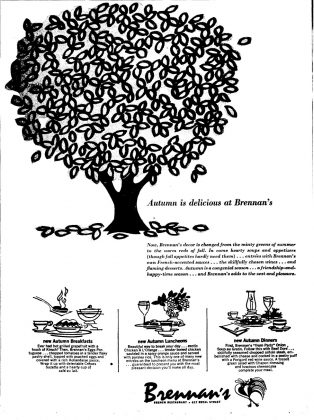 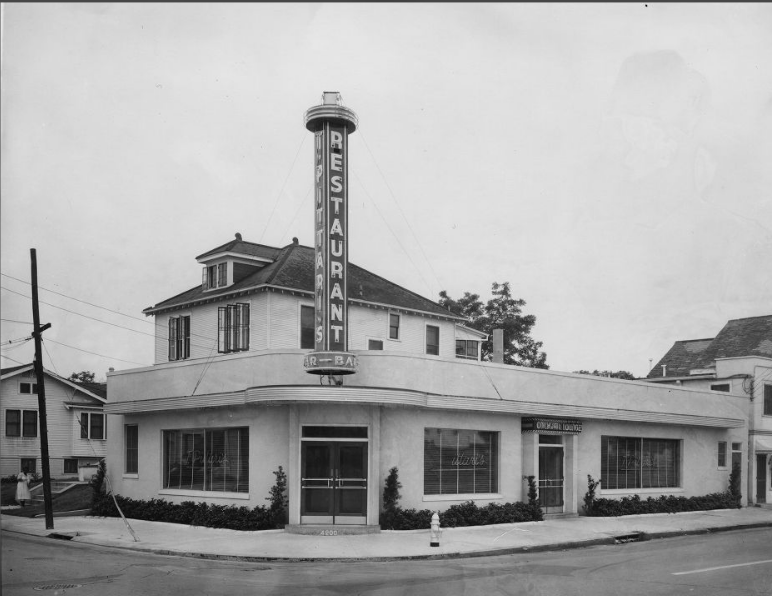 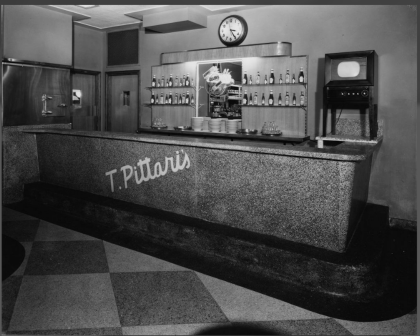 Maylie’s Restaurant served the Poydras Market area for over a century. 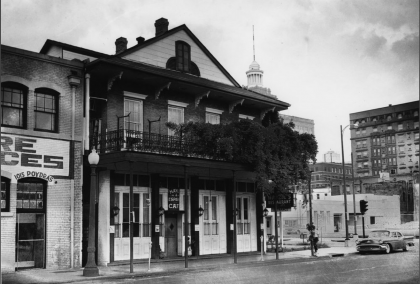 Franck Studios captured Maylie’s Restaurant, in the 1000 block of Poydras, in the 1950s. The Hibernia Bank Building looms over the old Poydras Market. Maylie’s opened as a bar in 1876, adding sandwiches and a full dinner menu as business grew. The restaurant closed in 1986. The location is now a Walk-Ons sports bar.

The Bernard Maylie and Hypolite Esparbe opened a bar at 1000 Poydras Street, in 1876. This location stood across the street from the Poydras Market. The city licensed and supervised a series of public markets. Thpse markets lasted into the 1940s, when privately-owned supermarkets replaced them. The public markets ensured sanitary conditions, particularly for sale of meat and seafood. By the 1930s, air-conditioning enabled grocers to expand beyond dry goods.

Maylie and Esparbe originally catered to the workers and stall-owners at the market. They offered a place where those men could stop for a drink or beer after the market closed. They recognized an opportunity to open earlier in the day, and gave away sandwiches to bar patrons. Eventually, customers suggested they stay open for dinner. The bar became a full restaurant. Maylie’s served a table d’hôte menu. Diners appreciated the regular fare and inexpensive prices.

The restaurant’s reputation allowed it to survive the changes in the neighborhood, after the closing of Poydras Market. Generations of men (women were not admitted until 1925) returned after work for dinner. Bernard Maylie’s grandson, Willie, operated the restaurant into the 1980s. Willie lived on the second floor of the building. He closed the restaurant in 1986.

While the Maylie’s building now houses the sports bar, another restaurant, Copper Vine, stands next to it. its name comes from that big vine growing out from Maylie’s, up onto the wall. So, the memories continue.