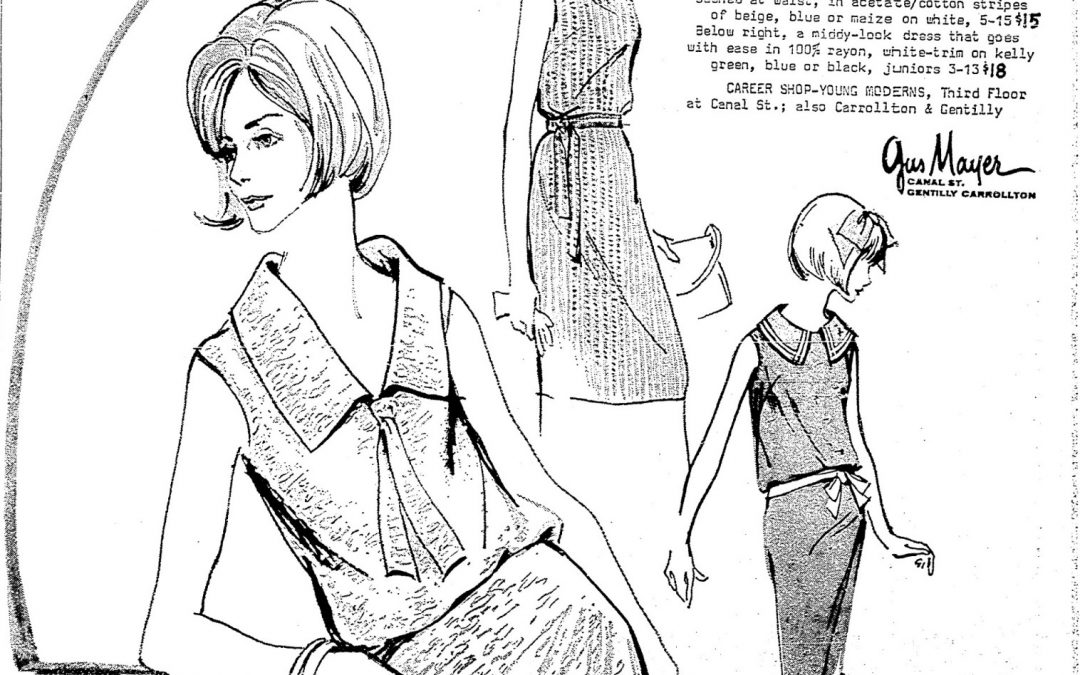 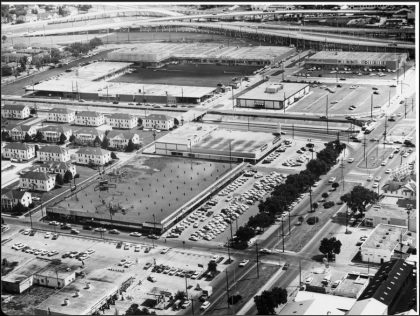 “Keep cool, in sleeveless dresses, deftly shaped…” Summer dresses in dacron-polyester from Gus Mayer. This ad, from the Times-Picayune on 4-June-1964. The store sold these dresses in the “Career Shop-Young Moderns” at the Canal Street location, on the third floor. By 1964, Gus Mayer operated three stores in the city. The venerable main store was at 800 Canal, corner Carondelet. They moved to that location from across the street in 1948. The old Pickwick Hotel building, built in 1895, came up for sale after World War II. Gus Mayer bought the property and demolished the building. They erected the building that is now the CVS Drugstore. So, the new location doubled the size of the original store.

Gus Mayer later expanded, sort-of following Maison Blanche’s strategy. MB opened two “suburban” stores in 1947, at Tulane and S. Carrollton Avenues, and Frenchmen Avenue and Gentilly Blvd. Gus Mayer opened on the other side of the now-closed New Canal. When the city filled in the canal in 1949, the state built the “Pontchartrain Expressway.” The expressway originally began at Pontchartrain Blvd. near Lake Lawn Cemetery. It extended into downtown, connecting with the original bridge of the Crescent City Connection.

Carrollton grew in popularity as Metairie grew in population. Airline Highway (US 61) made it easy for suburban shoppers to get to S. Carrollton Avenue. A number of stores recognized this potential. JC Penney anchored Carrollton in the west. Smaller stores, such as Labiche’s, Mayfair, and Baker’s Shoes. The center included an A&G Cafeteria, Winn-Dixie supermarket, and a Western Auto store. 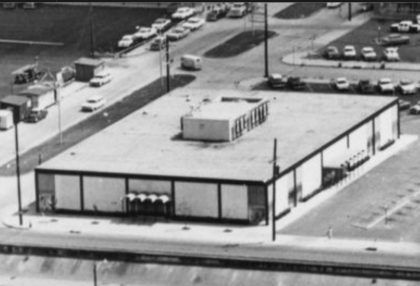 Gus Mayer anchored the center on its eastern side. While not as large as the two-floor Penney’s, the women’s store stood off from the strip-mall design, with its own parking area.

Gus Mayer once again followed the lead of Maison Blanche in the 1970s. As Metairie development continued in the west, Clearview Shopping Center opened at Clearview Parkway and I-10. MB had already moved their Carrollton Store to Airline Village, further out. (The Carrollton store became a Budget Store.) The department store then moved to the new mall in Metairie. Gus Mayer picked up on that trend. They closed their Carrollton Store, moving to Clearview.

All of the Gus Mayer Stores in New Orleans closed in the 1990s. The company operates two stores in Birmingham, Alabama.