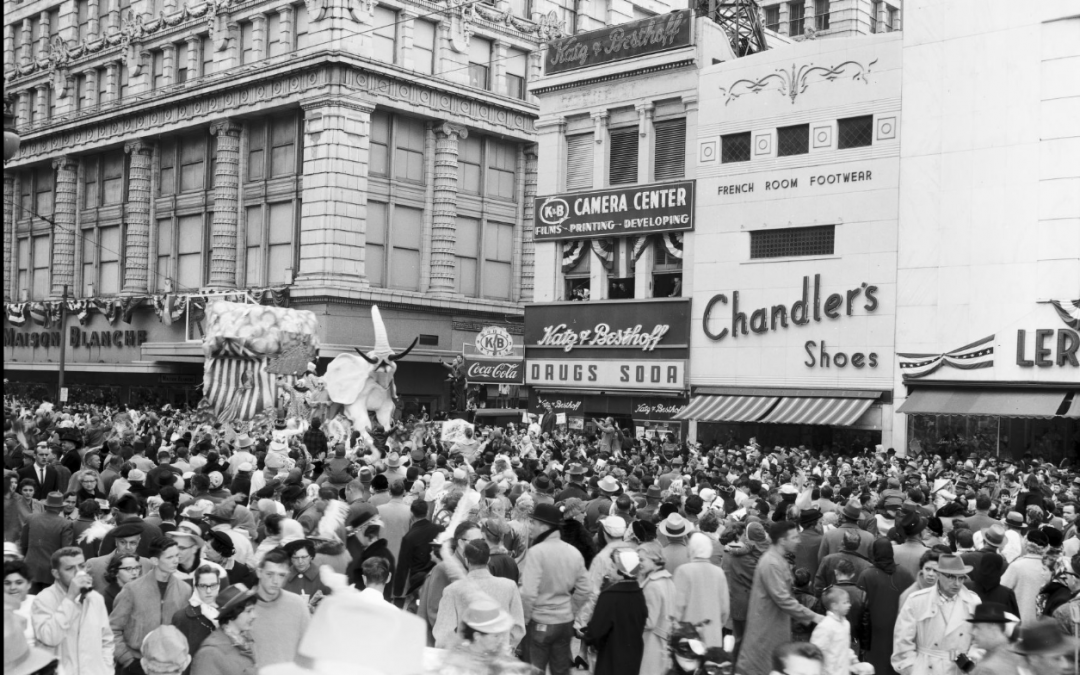 Rex Dumbo 1960 – the flying elephant appeared in the big parade. 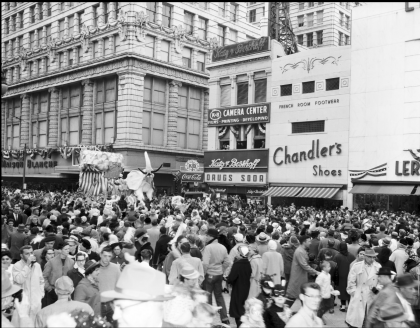 “Dumbo, the Flying Elephant” in the 1960 Rex parade, 1-March-1960. This photo, by Howard “Cole” Coleman, offers a great “unpack.” It features several Canal Street stores, Maison Blanche, Katz and Besthof, Chandler’s Shoes. The K&B had been converted to the “Camera Center” by this time. The parade rolled down St. Charles Avenue from Uptown. It turned left going the wrong way up Canal, then made a u-turn at Rampart. Rex then rolled down to the river.

Maison Blanche dominates the 901 block. The store boasted five floors of retail space. The two towers of the “Maison Blanche Office Building” rose up an additional seven floors. The store’s entrance was at the corner of Canal and Dauphine Street (right behind Rex Dumbo 1960 here). The “office building” entrance stood at the other side of the building. A separate set of elevators lifted you up to a myriad of doctors, dentists, and other businesses above the store. The Ritz-Carlton New Orleans uses the old office building entrace as the main entrance of the hotel.

K&B opened their store in the 800 block of Canal in the 1920s, to service those going to doctors in the MB building. By the late 1950s, the store became redundant, as the chain also operated a store across the street. So, K&B created the “Camera Center.” They sold cameras and photographic supplies on the second floor. The Camera Center grew in popularity, to the point where it took over the first floor as well.

The Edison Brothers opened the first in their chain of Chandler’s Shoe Stores in 1922. By the 1930s, they expanded to New Orleans. They opened a Chandler’s in the 800 block, next to Lerner’s, just up from Gus Mayer and D. H. Holmes. The Edisons opened a second chain they called Baker’s Shoes. The New Orleans Chandler’s became a Baker’s in the 1970s. Baker’s eventually moved out to the malls. The chain closed the CBD location. The retail front of the building is now a spa/massage place.

While many of the retail outlets on Canal Street erected grandstands, the stores in the 801 block chose not to. That offered prime parade-watching spots to folks who just wandered around. Cole Coleman stood on the neutral ground to get his photos. Additionally,Coleman crossed the neutral ground to take shots of the parade on the other side of Canal. At this time, Rex toasted his queen and the court at the Boston Club at 824 Canal.

The streetcars stopped, as they do today, at Liberty Street. They “switch-back” there, beginning their outbound runs.