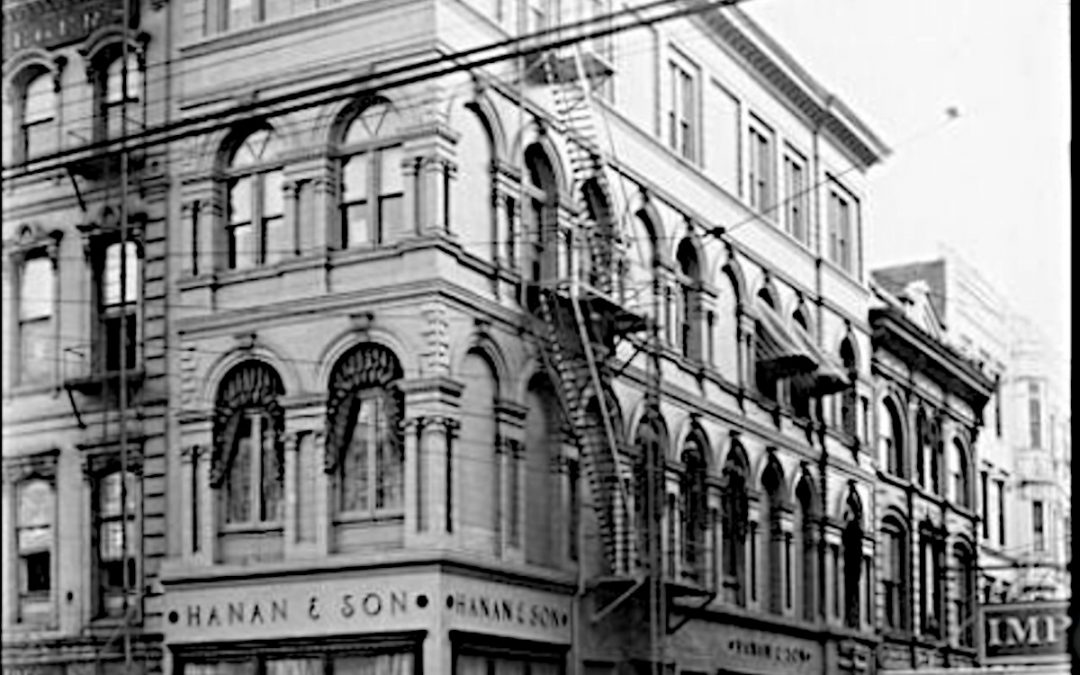 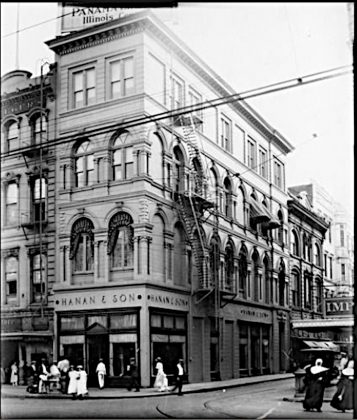 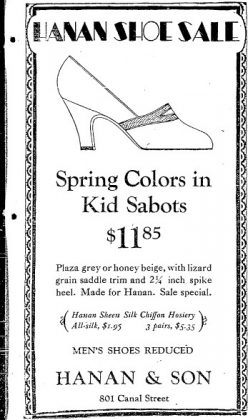 Franck Studios photo of the Hanan & Son shoe store, 801 Canal Street. HNOC dates the photo at between 1925 and 1933. The building replaced an earlier structure that was destroyed by fire in 1892. Hanan & Son was a shoe manufacturer in New York City. Kreeger’s occupied the space at 805 Canal, just to the right. Kreeger’s later acquired 801 and expanded into that space. D. H. Holmes department store wrapped around 801 and 805 Canal. The Bourbon Street entrance of Holmes is visible behind 801 Canal. It’s the three-story building down the block.

The Hanan Company manufactured shoes in Brooklyn. While other manufacturers went with a customized/handmade look, Hanan stamped their name on the soles of the shoes. This increased their sales. Beginning in the 1880s, the company opened retail stores in a number of American cities. 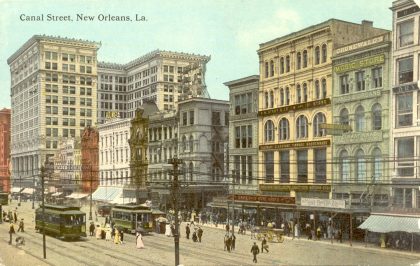 The building at 801 Canal Street appealed to Hanan’s. Imperial Shoe Store took over the riverside corner across the street in the 701 block when A. Shwartz and Son closed. Shoppers walked from one side of Bourbon to the other as they sought out the latest shoe styles. Hanan & Son fell on hard times during the Great Depression. They closed a number of stores in the early 1930s. Imperial Shoes picked up the Hanan product line. They added “Hanan Shoes” to their Canal Street signage. So, Hanan’s presence continued on in New Orleans. The company went bankrupt in 1935.

The Kreeger family opened their store at 805 Canal after the rebel surrender in 1865. They sold ladies fashions. Kreeger’s specialized in furs, coats and stoles.

Kreeger’s grew in popularity. They survived the 1892 fire that destroyed the 701 block of Canal and the 801 corner building. When Hanan & Son left 801 Canal, Kreeger’s acquired the space. They expanded the store to Bourbon Street.

The company further expanded in the 1980s. They opened an “outlet” store at One Canal Place. Additionally, they opened stores in Lakeside Shopping Center, Uptown Square, and in Lafayette. The oil bust of the 1980s presented challenges for Kreegers. Changing styles and opinions with respect to furs also hurt sales. Kreeger’s declared bankruptcy in 1986. They closed their remaining store, in Lakeside, that year.

801-805 Canal housed a number of businesses after Kreeger’s closed. In 2010, the first floor retail space was a Foot Locker store. The space is currently a Walgreens. While this seems redundant, given the large Walgreens at 900 Canal, it makes sense. It’s all about convenience in a busy neighborhood.

Some interesting details in the photo:

Imperial Shoes – The store’s street-level sign is partially visible on the left. A pair of nuns cross Bourbon, just below it.

D. H. Holmes – As mentioned in the introduction, the Bourbon Street entrance of the iconic department store is visible behind Hanan’s. that side offered Holmes a separate entrance for the Holmes Restaurant.

Kreeger’s – the signage at 805 Canal is just visible.

Illinois Central – A billboard for the Panama Limited train stands on the roof. The ICRR offered all-Pullman sleeper car service from New Orleans to Chicago. Amtrak continues to operate the route as their incarnation of the City of New Orleans.