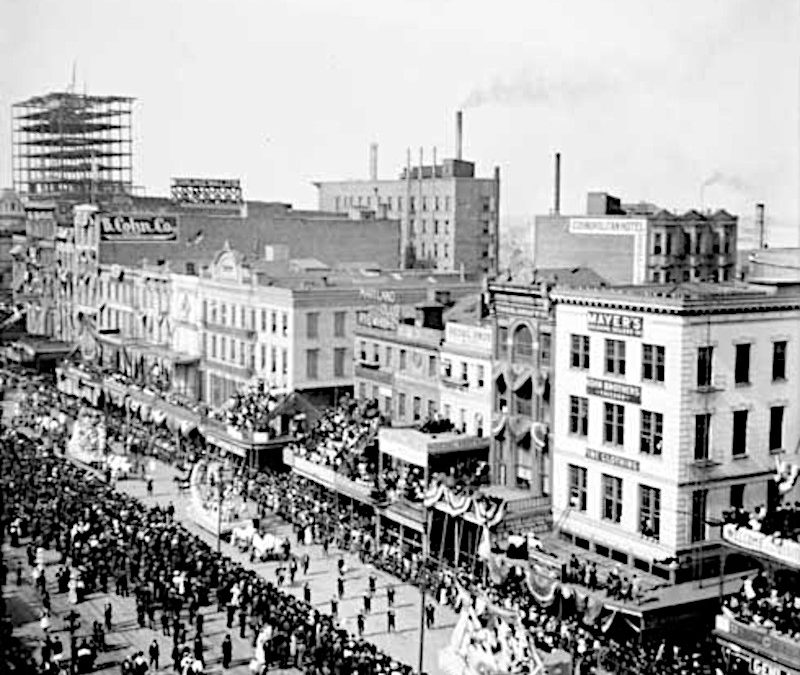 Alexander Allison caught the 1907 Rex Parade from the 500 block of Canal Street. 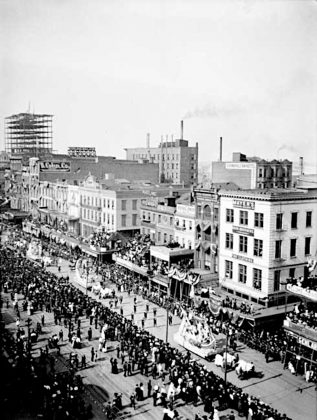 The parade of Rex, King of Carnival, heading down Canal Street, on 12-February-1907. Photograph by Alexander Allison. The photographer stood on the roof of a building in the 500 block of Canal, looking up the street. The photo shows the 601, 701, and 801 blocks of Canal Street. The structure of the Maison Blanche Building is visible on the far left side.

Allison was an engineer for the New Orleans Sewage and Water Board from 1900 until his retirement in 1959. He carried a camera with him all around the city. When Mr. Allison passed in 1964, his daughter donated his photo collection to the New Orleans Public Library (NOPL).

Allison’s photographs document the growth and changes in New Orleans in the first half of the 20th Century. His photos are an incredible resource.

So, Allison catches the Rex parade on Canal Street. The parade came down St. Charles Avenue from Uptown. They turned left at Canal, going on the wrong side of the street. Not a problem, of course, since the parade route was closed. This enabled Rex to pass in front of the Boston Club, in the 800 block. Rex toasted his queen and court there. The parade went up to Rampart Street, where it made a u-turn. They paraded down Canal, turning onto N. Front Street, where they disbanded.

Almost every building on the French Quarter side of Canal Street erected reviewing stands for Carnival. Mayer’s anchored the corner of Canal and Chartres Streets, at 601. The four-story Touro Buildings in the 701 block remain very much as they were when built in the 1840s. After the big fire of 1892, the building at the corner of Canal and Bourbon Street was raised to five stories. The dry goods store, B. Cohn Company, occupied that space in 1907. The first two floors of the Touro Buildings held retail shops, usually owned by Jewish retailers. Judah Touro rented to fellow members of that community, and the practice continued throughout the 19th Century. Marks Isaacs, previously partnered with Charles Kaufman on Dryades Street. He then joined with S. J. Shwartz at Maison Blanche. In 1907, Isaacs left MB, opening his own store in the Touro Buildings. The Marks Isaacs store closed in the 1960s. The 801 block included Hanan & Son Shoes, Kreegers, and D. H. Holmes. Allison’s position in the 500 block compresses the view of the 801 and 901 blocks.

The steel superstructure of the “new” Maison Blanche building is visible on the far left of the photo. S. J. Shwartz demolished the 1884-vintage Mercier Building in 1907. He tore down the back of his store, building the rear section first. When that structure was complete, Maison Blanche moved everything into the new building. They then tore down the rest of the old building, that fronted Canal Street.

The NOPL record for this photo lists several inaccuracies that made it a challenge to identify. While the photo said 1908, the theme of the parade and the Viking float at bottom right puts this as the 1907 parade. The MB construction also confirms this. The location listing says Allison was at the Chess, Checker, and Whist Club, but that is also inaccurate. That club stood further up, at 900 Canal Street. So, for this photo, Allison was five blocks further down. NOPL expresses concern about the accuracy of Allison’s dates and locations. The errors on this photo indicate they were likely made by someone going back through the collection, not Allison himself.

Since this post is the first #AllisonUnpack of the series, it’s not behind the Patreon wall. We’ll elaborate on some of this in a second, patron-only post. After this, these unpacks will be in the usual format. Everyone will see the first 100ish words and the image, with the full story available for patrons.