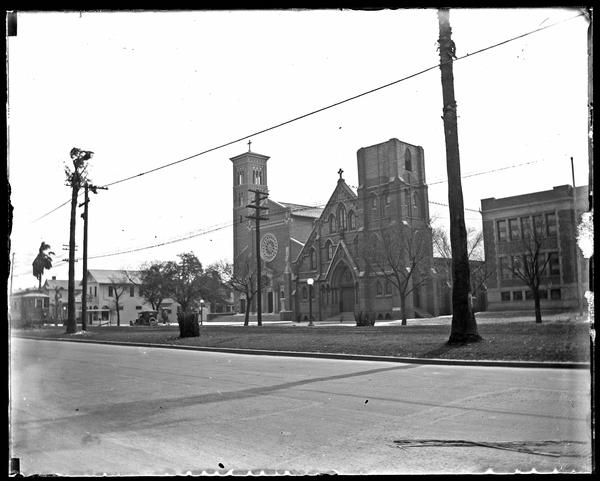 Sacred Heart Old/New – view of the new church before the old was demolished. 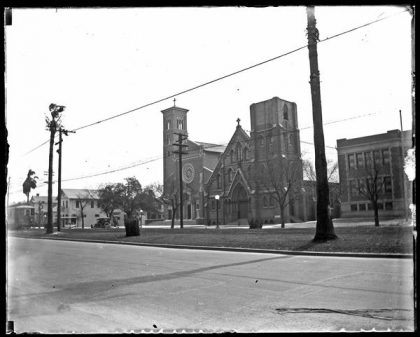 John Tibule Mendes shot this photo of Sacred Heart Old/New on 2-March-1924. He captured a moment, just after the completion of the parish’s new church and before the old building was demolished.

Located in the 3200 block of Canal Street, between S. Lopez and S. Rendon Streets, the Archdiocese created the parish in 1879. By 1882, Sacred Heart Old/New operated out of a three-room building. That first building housed both the rectory and the church. The parishoners built their first church in the 1880s. Additionally, the parish opened a school, first in a two-room classroom building.

Louis Armstrong was baptized in the “old” church of Sacred Heart Old/New.

By 1920, the parish desired a larger church. They built the “new” church next to the existing building. The new church stands to the left in this Mendes photo. Archbishop Shaw dedicated the completed church in 1924. Sacred Heart Old/New saw the old church demolished in 1924. The parish replaced the church with a new school building.

Sacred Heart of Jesus operated an elementary school in their buildings for decades. They closed the school in the 1940s. It reopened as a high school during the war. The school initially admitted both boys and girls. As the war progressed, however, fewer boys enrolled. So, the school adjusted. It became an all-girls school.

This photo’s caption, via HNOC:

View of the 3200 block of Canal Street showing two churches and other buildings along the street. The view is made from the far side of the street and shows the neutral ground with streetcar tracks. A streetcar and automobile are also in view.

The streetcar to the left of the churches is a “Palace” car, built by the American Car Company and operated by NOPSI. It’s running on the Canal/Esplanade belt, or the West End line.