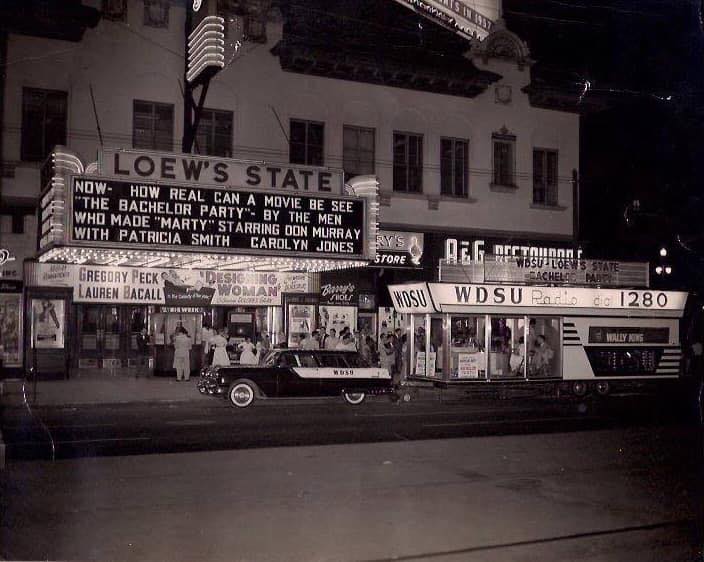 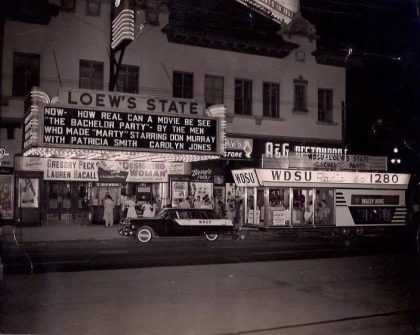 Photo of the Loew’s State Theater, May, 1957. The theater stands on the corner of Canal and S. Rampart Streets. A WDSU radio remote unit sits outside on Canal Street. Barry’s Shoe Store and an A&G Restaurant to the right. The Loew’s wraps up the run of “Designing Women” with Gregory Peck and Lauren Bacall. The next film, “The Bachelor Party,” appears on the main marquee.

The Loew’s Cineplex Entertainment theater chain constructed a theater in New Orleans in 1926. They located it at Canal and S. Rampart. Additionally, Loew’s, named for founder Marcus Loew, owned Metro-Goldwyn-Mayer (MGM) Studios. On April 3, 1926, a cavalcade of silent movie stars joined Loew to open the State Theater. Later, the chain re-branded it as “Loew’s State Theater.”

By the 1950s, Loew’s State, standing across Canal Street from the Saenger Theater, regularly offered MGM movies to New Orleans. 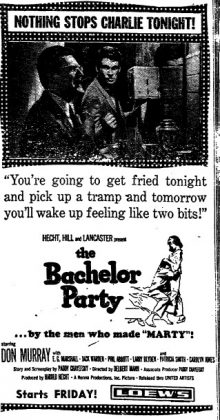 Hecht, Hill and Lancaster opened their film, “Bachelor Party” in New Orleans on 19-April-1957. The film starred Don Murray, E.G. Marshall, Patricia Smith, and Carolyn Jones. While this photo isn’t dated, the scene is consistent with the week before the film’s opening. So, WDSU Radio, AM 1280, rolled out their remote studio. They parked the trailer in front of Loew’s State. The signs on top of the remote studio display,

The rear of the trailer displays the current on-air host, Wally King. There are a few signs in the glass front of the studio that are unreadable (at least by me). If you can “clean it up,” as the nonsense teevee shows say, please let me know.

Interview with Patricia Smith, star of “Bachelor Party” in the Times-Picayune, 15-April-1957.

The Times-Picayune ran an interview with “Pat” Smith on Wednesday, April 17th, from the day before. It was typical for the studios to send the stars of a film out to various cities. Smith received an itinerary that included New Orleans. Paddy Chayefsky wrote “Bachelor Party.” Delbert Mann directed the film. Smith expressed excitement that she may get to go to the Cannes Film Festival, should the film be shown there.

So, my guess is that Da Paper interviewed Smith at The Roosevelt, which was just down the street from the theater. WDSU required their equipment for a proper radio interview. They brought the studio to Canal and S. Rampart. Since the theater’s name appears on the rooftop sign on the trailer that evening, Loew’s likely sponsored the interview.

Unpacking Loew’s State Theater includes the retail storefronts in the building. From right to left:

A&G Restaurant – A&G opened their first “restaurant” on Canal and N. Broad in the 1940s. We know the chain as “cafeterias,” but the branding in the 40s and 50s was as restaurants. I’m not sure if that’s just how they chose to name the places, or if they were actual restaurants at the time. I need to look into this further. While they were all cafeteria service when I remember going to the ones on Broad and in Metairie in the 1960s, they all had “waiters” who would bring your tray to the table for you. It’s almost as if they were holdovers from restaurant-style service. This is on my to-do list now. Typical of these “unpacks,” I’m left with more questions than answers.

Barry’s Shoe Store – Most of the larger neon sign next to the marquee is cut off at this angle, but the sign over the store’s door shows the full name. The big sign tips off what kind of shoe store Barry’s was. That’s the signature symbol of “Red Goose Shoes” on the right. So, Barry’s specialized in kids shoes. I found a couple of memories in books of New Orleanians being taken to Barry’s for shoes by their moms. Again, more to come on that.

Polly’s and Cotton’s – Out of frame on the right stood Polly’s Lingerie, next to the main theater entrance. Cotton’s Jewelers stood next to Polly’s, at the corner. 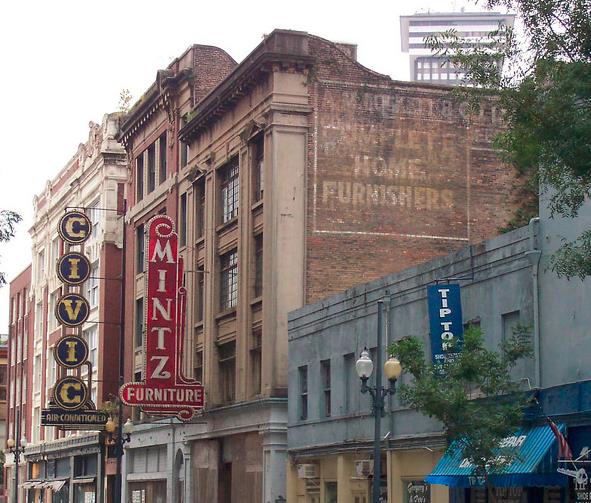 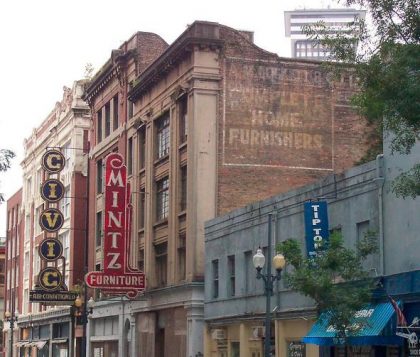 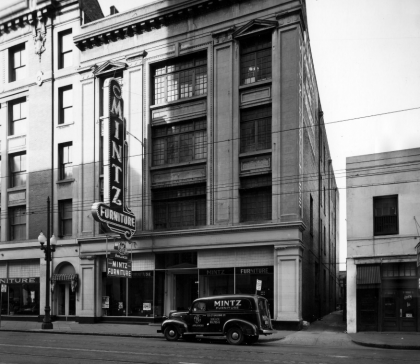 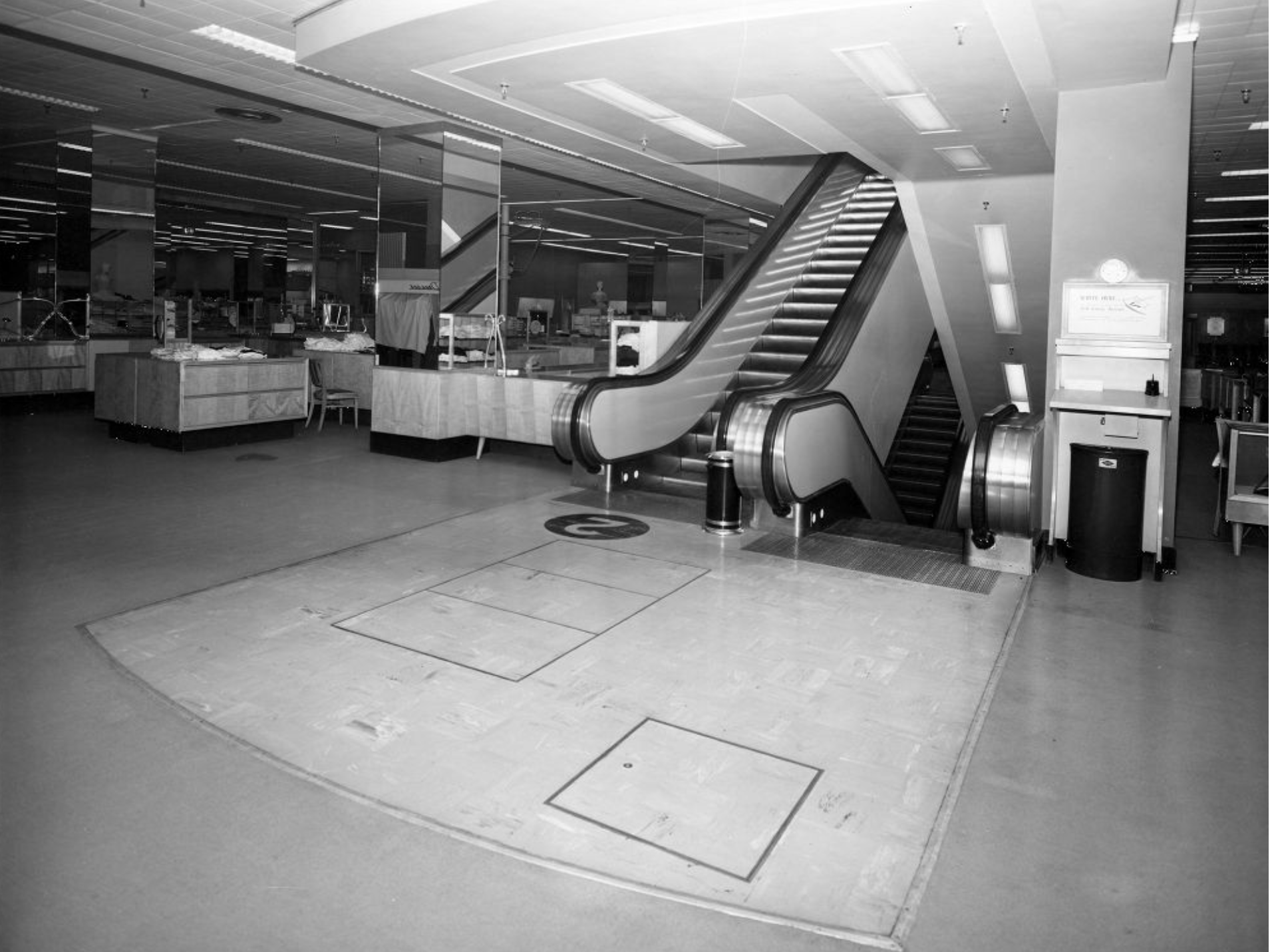 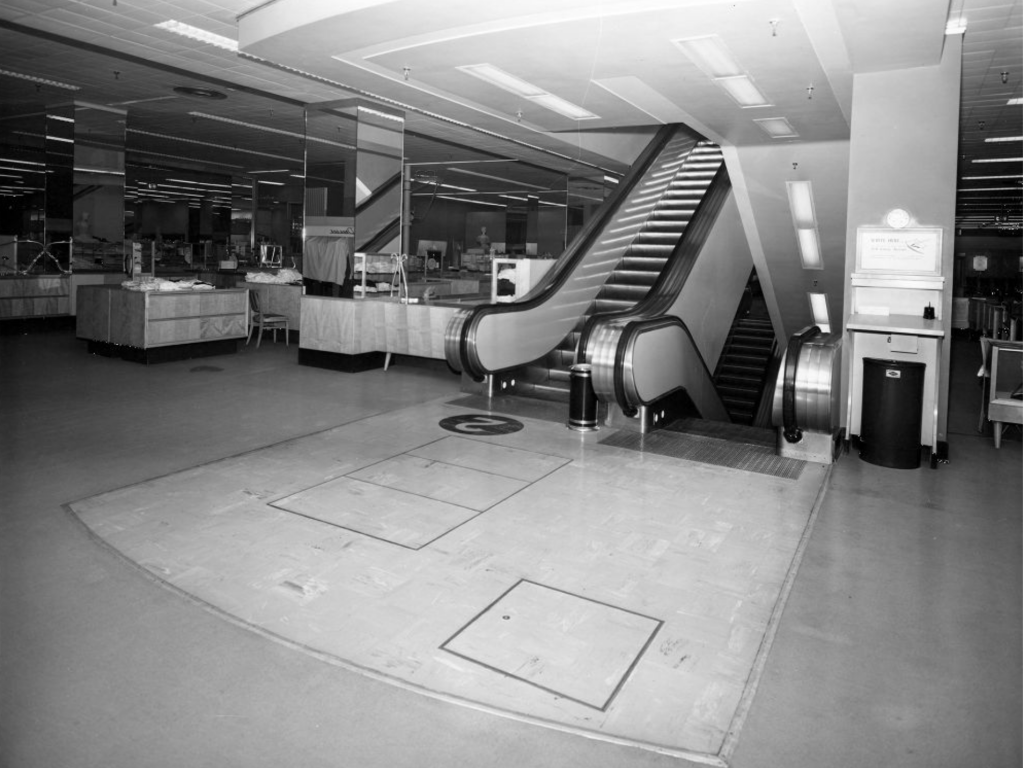 While Krauss – The New Orleans Value Store was the first department store on Canal Street to install an escalator, MB wasn’t far behind. MB Memories for me include a lot of up and down on those escalators.

Krauss added an escalator from the ground (first) floor to the “Mezzanine” in 1927. Not to be outdone, Maison Blanche acquired an escalator system a year later. Those first escalators were “up-only” systems. They were meant to get shoppers upstairs quickly. Getting down was another story. The store wasn’t all that motivated to get folks out of the store. So, initially, the paths back down to the first floor included stairs (from the second floor), and the elevators.

Eventually, MB expanded the escalators to all five floors. The elevators were towards the rear of all the stores. The open architecture of escalators made them attractive to customer and retailer alike.

Maison Blanche in the 1950s

This Franck Studios photo is from the early 1950s. The post-war boom was in full swing. Returning vets finished their educations. They moved out of mom and dad’s house, to Gentilly and Lakeview. Really adventurous folks headed to the suburbs, Metairie and Chalmette. Maison Blanche recognized this, opening stores in Mid-City and Gentilly in 1948. The Airline store wasn’t far behind.

Throughout all that expansion, Canal Street anchored the chain. The five-story store continued drawing shoppers from all over the city. Buses replaced streetcars on many transit lines, but that didn’t stop the shoppers. They still came to Canal Street.

Many older shoppers didn’t trust escalators. They didn’t like stairs, so they continued to use the elevators. MB’s elevators had human operators for years. Automatic, push-the-button service, was considered bad treatment of customers. Cheerful smiles encouraged buyers to buy!