Twelfth Night and the PPP 2019 #StreetcarMonday 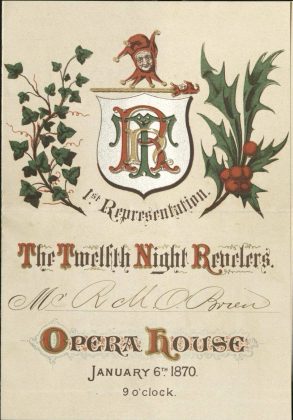 It’s the start of Carnival season. We’ve done a podcast on Twelfth Night that you’ll enjoy listening to. The roots of the Feast of the Epiphany are deep. So much of European Catholicism involves co-opting older traditions. Celebrating King’s Day is one of those co-opts. Rather than human sacrifice, the priests shifted the focus to baby Jesus. What’s important is to allow the people to continue celebrating. And celebrate they did.

The first formal Twelfth Night celebration in New Orleans happened in 1870, when the Twelfth Night Revelers TNR held their first bal masque. TNR appeared on the Carnival scene thirteen years after Comus (1857). TNR chose the first day of Carnival for their celebration, rather than the last. Because their ball opened the season, it evolved into an important event in the debutante season. 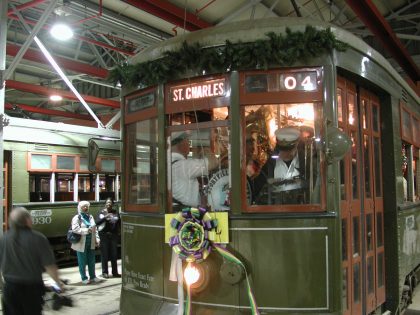 The Phunny Phorty Phellows (PPP) continued their tradition of announcing the start of the Carnival season last night. While the original PPP rode on horseback, the current incarnation rides streetcars. The PPP ride the traditional “party car” route. View Richard Vallon’s video of the PPP rolling out last night.

They start at Carrollton Station, then ride down S. Carrollton and St. Charles Avenues. At Tivoli Circus, the streetcars make the entire circle, returning to the streetcar barn the way they rode out. Because PPP started when only the St. Charles Line (with its 35 1923-vintage arch roofs) existed, they had no other options.

A second streetcar celebration followed the PPP last night, the Funky Uptown Krewe (FUK. Yes, we’ll abbreviate it that way, too.) A much-younger group boarded a streetcar after the PPP’s departure from Carrollton Station. It doesn’t get any better. Additionally, the La Société Pas Si Secrète Des Champs-Élysées (Not So Secret Society of Elysian Fields) rides Von Dullen streetcars along the Canal and N. Rampart lines.

The video of last night’s PPP ride is courtesy of Richard Vallon and Orleans Image Consulting. Thanks, Richard!