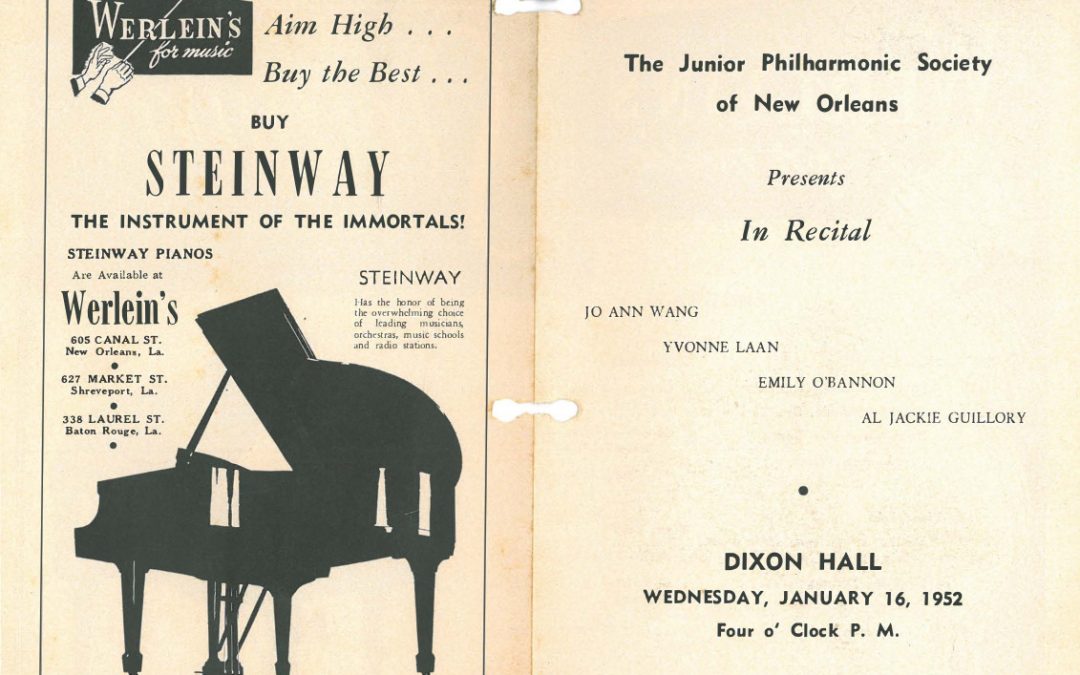 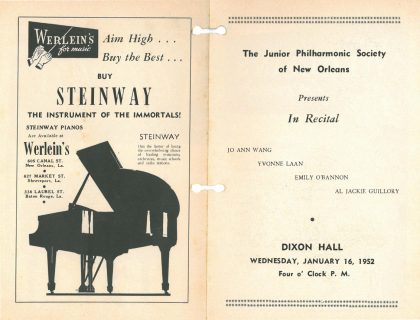 Program for the annual recital of the Junior Philharmonic Society New Orleans. The recital was held on January 16, 1952. The Society holds an annual recital featuring instrumental, voice, and dance performances. Students audition for the recital.

The Society is still around, From their Mission Statement

The The Junior Philharmonic Society of New Orleans was incorporated as a non-profit, cultural organization in the State of Louisiana in 1948 by Katherine Nolan Kammer. Our mission is to give talented young student instrumentalists, vocalists and dancers an opportunity to perform in a recital held in a professional setting, and to teach music appreciation to children attending the programs. Performers are chosen by audition, and all performances are free and open to the public.

The number of students performing each year varies. In 1952, there were four students at the recital. This is a bit different from “honor band” and “youth orchestra” performances, in that there isn’t one large ensemble.

One of the sponsors of the The Junior Philharmonic Society New Orleans in 1952 was Werlein’s, the well-known music store on Canal Street. Werlein’s was where the jazz trombonist Edward “Kid” Ory purchased his first trombone. The store, located at 605 Canal Street, closed its Canal Street location years ago. The building now houses the Palace Cafe restaurant, owned by Dickie Brennan. After closing on Canal, Werlein’s moved to Veterans Blvd., in Metairie. In 1952, Werlein’s had stores in Baton Rouge and Shreveport, as well as the downtown flagship location.

There were four performers at the 1952 recital:

The piano soloists used, of course, a Steinway piano.

Given the pandemic, The Society offers a virtual recital. So, these students won’t get to perform in Dixon Hall, on the Tulane University main campus. It’s a lovely performance hall. The school makes it available for elementary, middle school, and high school performances. It’s a great recruiting tool.